Weblizar Blog - Update yourself with all the latest tech news revolving around wordpress all at one place 5 Best Free VPNs for Windows XP in 2019 - Weblizar Blog
Themes ($79) + Plugins ($59) = All Products Bundles ($99)
Grab it Now
HOT DEAL : 36+ WordPress Themes & Plugins Bundle with Lifetime Update & Uses Only $99 For more Detail to Click Here 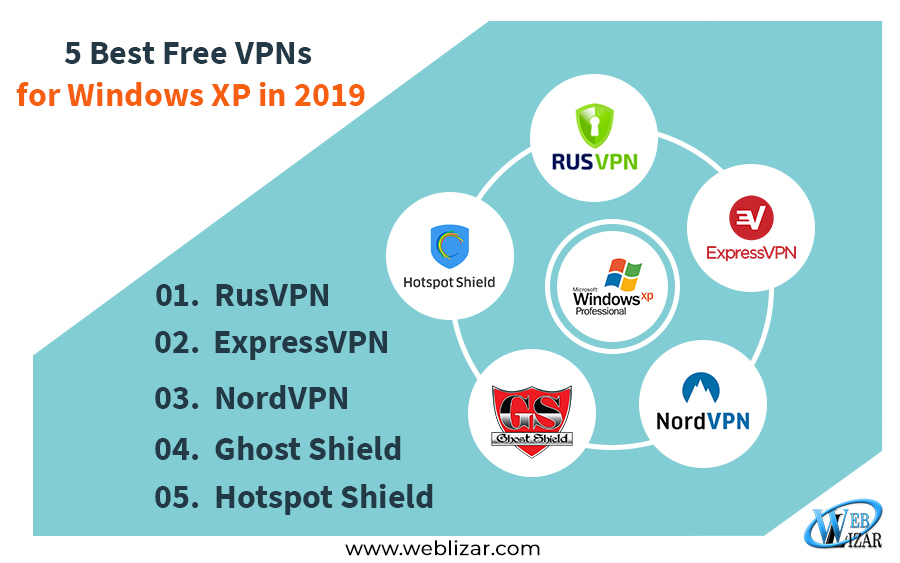 Although it’s 2019, many PC users to this day prefer using Microsoft Windows XP. There are several reasons for this:

However, when it comes to software, the situation is getting worse and worse each year. The harsh rules of the software market force developers to abandon, and stop updating their products for Windows XP, Vista, etc.

Today we are going to tell you about five services that still provide free VPN for Windows XP.

Read, compare, and choose the best one for your VPN needs.

RusVPN can end up being your best solution.

First of all, it’s available for all possible devices and operational systems: iOS, Android, Windows (32bit, 64bit, 86bit), Linux, and even Cisco PPTP/L2TP.

Another feature of the service is that you do not need to leave your personal information for registration.

On top of that, here are the main advantages of this free VPN for XP:

This list of the main features of the VPN client for Windows XP is not extensive. Mostly, it has got to the ‘editor’s choice’ section because of constant improvement and support. The team cares about the users’ convenience, and they prove it by instant help, stable connection, and absence of major glitches.

ExpressVPN is another relatively reliable VPN client for Windows XP with a free download option. It’s good because of its simplicity, security, and power. It has got a user-friendly operation panel. Like the previous competitor, it’s cross-platform software. The developers have made a detailed setup tutorial. You can choose your preferred security protocol: OpenVPN, TCP, L2TP, PPTP, or SSTP.

With every new release, a team tries fixing glitches with servers and speed. Unfortunately, speed is the main disadvantage of this software. Sometimes it’s not sufficient to download even a small file. During the evenings, there are too many users are online hence the software lacks open servers.

The second reason that restrains us from giving ExpressVPN the first place is the price.

The service is paid, without exceptions.

Indeed, it is not so affordable in comparison with other competitors. However, if you do not care about the price and need a reliable service with a good security certificate, multiple network tunnels, and comprehensive support, ExpressVPN will do a great job.

NordVPN is another free VPN software for Windows XP. Like RusVPN, it provides a seven-day free trial which allows the user to test it. Here are its main advantages and disadvantages:

In general, this app is greatly compatible with slow processors and operational systems. After being tested on Intel’s Atom, the VPN’s Windows XP version from NordVPN has shown good compatibility and efficiency.

The service has a new name “CyberGhost”. Every lover of VPN can download it for free on Windows XP. In general, this service is developed mainly for European users. It has a big tunnel choice in the region. It is flexible enough for users with various connections (including smartcard) and operating systems to be able to use it without complications. However, you need to have a paid version to use it on MAC and mobile phones. Time limitations of the VPN connection spoil the general impression. Finally, it lacks servers that are located in Asia and South America. It has fewer glitches with support than the service described below, but some of them can still be found.

This relatively free VPN for PC Windows XP could have potentially scored more points than it did. It has shown an average speed and flexibility relating to the device choice. The price-to-quality ratio is very good. However, its main problem is security.

Due to registration, we could not ensure that the service did not make logs of user activity.

The company provides 30 day chargeback period, where the user is eligible to receive a complete refund if they are unsatisfied with the results.

If your requirements go far beyond simple site scrolling, Hotspot Shield is not for you.

You’ve just read reviews of the top five services that are still available for Windows XP. Each of them is a highly popular and respected company with years of experience and a vast client base. According to the test results, RusVPN remains to be the best choice. It deals well with all common issues and delivers you top-notch quality. They have constant updates. Their helpful support team does their best to help users. Among all available VPNs, this is the only free service that does not show any ads. The paid version can be a good fit for any budget. As for server numbers and security, it’s a worthy competitor with old and reliable companies. No logs, thousands of servers, fast speed, and high-security measures.

It is the first time I hear about RusVPN. It seems a very nice provider with a lot of pros. I will definitely test it soon. At this moment I am using a NordVPN security tool. I love the app and how easy it is to use it.

I have used nord VPN in the past and it had its fair share of bug but planning on using RusVPN in the future after reading this blog.