Weblizar Blog - Update yourself with all the latest tech news revolving around wordpress all at one place 6 Practical Reasons to Learn C# Programming - Weblizar Blog
Themes ($79) + Plugins ($59) = All Products Bundles ($99)
Grab it Now
HOT DEAL : 36+ WordPress Themes & Plugins Bundle with Lifetime Update & Uses Only $99 For more Detail to Click Here 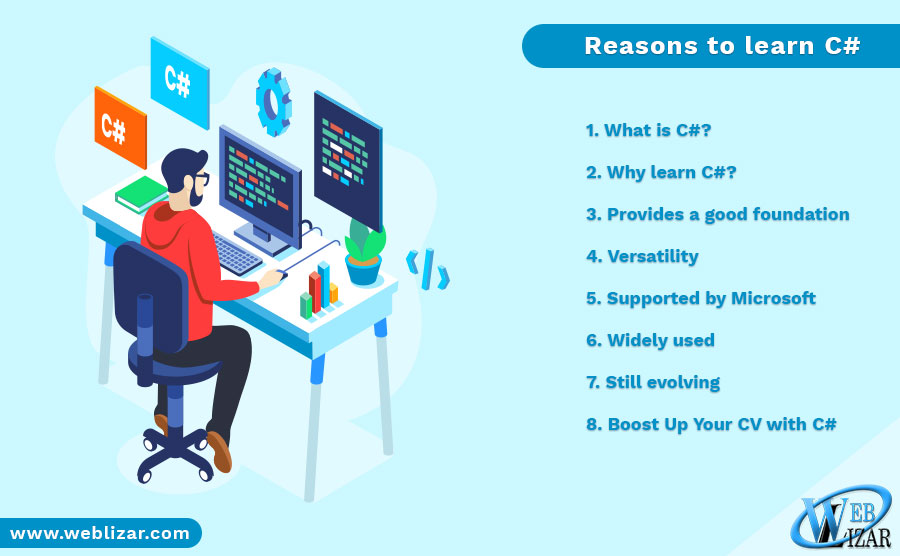 C# is a Microsoft programming language that is a hybrid of C and C++ with several updated features of both.  This object-oriented programming language combines the computing power of C++ with the easy coding language of JavaScript. It works on the .NET platform that is known for better productivity during the development of website applications.

C# is mainly used for the creation of desktop applications and games on Windows along with mobile development. It currently is the 4 th most popular programming language in the world.

C# also offers multiple class inheritance along with garbage collection which is not supported by many other programming languages. Unlike C++ which does not provide a very strong compiler that easily points out errors, the compiler in C# gives several warnings in case of any inadvertent error code that can damage the OS.

This and other features have made C# a much used and popular software and C# developers a very valuable resource all over the world. Software developers nowadays take up a C# course to enhance their coding abilities.

Let’s look at some of the top reasons why this language has become popular and why you need to add it to your CV.

The learning curve of this language is relatively simpler as compared to various others i.e it is more beginner-friendly. This is mainly because it uses the syntax’s common to C, C++, Java and Python.

C# is a high level language, which means most of its syntax is very similar to the common English language. It thus supports the need of any modern day software developer, making it much easier to grasp. The basic concepts of C# are also very easy to understand, even for a newbie. This cuts down on the learning curve and applications can be made much quicker.

Another advantage of using C# is that it itself handles most of the complex object handling and memory management, which make it relatively simpler for beginner developers.

Since C# is a hybrid of C and C++, learning the basics of it will definitely make the learning of many other programming languages very simple.

Once C# is learned wholly, learning other programming languages is quite easy. C# also has a syntax that is very similar to Java, so learning C# makes Java programming a tad bit simpler.

What makes C# more attractive to software developers today is the fact that this has a variety of applications.

Not only this, one can even switch between a mobile application and web application, in order to build something which combines both these functionalities.

Thus, by simply learning one programming language, one can actually focus on a wide array of applications, making it more time efficient. This is something which is not present in other programming languages. For example, Python has not really adapted very well to mobile apps and so on.

This software programming which was developed by Microsoft in 2000 is largely supported and maintained by Microsoft. Because of this, C# has a very strong online community. Microsoft has in fact provided numerous tools to help developers programmer better in C#.

C# has also become one of the most popular programming languages which has resulted in the creation of many books, tutorials, and videos which can be used to master it. This also means that any queries related to C# can be easily solved online.

C# has various applications which include game development. Since developing games is something every techie loves, this actually is a major reason why many software developers learn C#. Also, since this programming language has gained widespread popularity in recent years, numerous job opportunities open up once one has a good understanding of C#.

C#  is the fifth most popular programming language today, and since it was developed by Microsoft, it is still evolving as new features and functions keep getting added often.

Boost Up Your CV with C#

Due to the above reasons, C# has gained popularity as one of the top 5 most sought after programming languages in today’s world. Learn C# with a C# certification to boost your career goals even further.