Advantages and Comparison of SSD VPS Server for WordPress sites 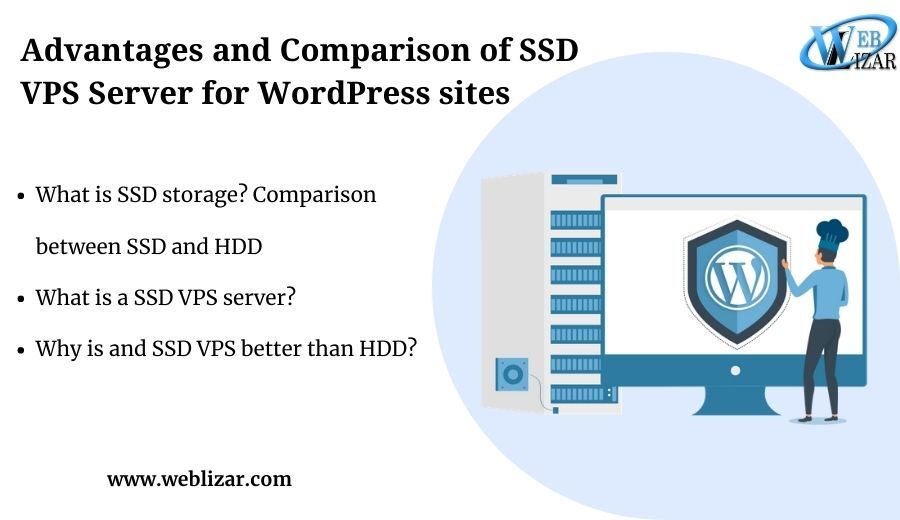 Technical science is constantly advancing and new technologies are continually developed and released to the market in every field, but this is truer in the file of computing and internet than any other. It was not long ago when computers carried floppy disks and heavy-weight Hard Drive Discs or HDD s with little storage space compared to today.

But now not only those old mechanical floppy discs have been long obsolete, even their successors, the CD drives are obsolete and DVD drives are now longer a necessary equipment for a computer.

The same is true for old HDD storage, although upgraded several times during the past two decades, is now being replaced on both PC and server computers by the new non-mechanical much-faster storage devices called SSD.

What is SSD storage? Comparison between SSD and HDD

SSD, short for Solid State Drive, is rapidly becoming the default storage method for all computers, but more so on internet servers and VPS. There are a couple of good reasons for that. SSD is a non-mechanical storage device, meaning it consumes a lot less energy than HDD which needs to run several metal discs at 5000 to 15000 thousand rounds per second, depending on the type.

In normal computers, the CPU, the HDD and the screen light are the big three juice eaters that consume energy. A server typically does not have a screen, but it has several CPU cores and HDD devices equipped which compete for most electricity consumption.

For the data centers, opting out for SSD means saving a lot of energy money, even though SSD are a couple of times more expensive than HDD.
On the other hand, SSD is a Random Access Memory type of storage, meaning much faster data access times, which is a great boon for a server.

Moreover, the Solid State technology is on and of itself a fast storage technology, increasing the speed gap between SSD and HDD even further.

The last, but not the least reason, is a consequence of speed difference. Truth be told, available mass-produced storage technologies have not advanced as well as other equipment in modern computers. Today, servers and PCs alike have several times the amount of RAM their predecessors had and boast a thousand times more processing power compared to 20 years ago.

This is why having SSD storage on your server, VPS, or even your PC matters a lot, because it removes the greatest bottleneck in system performance.
One more thing: in the long run, an SSD storage is much less likely to break under the working pressure of a server, compared to an HDD.

An HDD has very delicate mechanical, moving parts, which are generally more prone to tear and wear under the constant pressure of a server load.

What is a SSD VPS server?

As you may very well know, a VPS is a kind of virtual machine run on a physical server that mimics an actual server. To create VPS, a real server is partitioned into several smaller virtual servers using a virtualization technology of choice, and then each virtual server (which is a private machine, by the way) runs independently of other VMs; thus the name Virtual Private Server or VPS.

There are many web hosting companies who offer VPS hosting directly to their clients. Since it is a small portion of a server, it is much cheaper than the real one but works nearly just like a real server. VPS is the best option for hosting small to medium-sized websites hosted on WordPress or other CMS software, for forex trading, game servers, remote desktop machines, and many more common use-cases.

Why is and SSD VPS better than HDD?

Many of the use-cases I mentioned above are typically sensitive to performance. Especially are the ones that need retrieving data and files from and storing to storage. A website is the most typical such case. When you run your WordPress website on SSD server or VPS, the difference in speed compared to that of an ordinary HDD storage is quite noticeable. The web pages load faster, data is retrieved and stored faster, and high traffic is much less likely to hurt its overall performance.

Once again, I mentioned earlier than an SSD drive is a safer option considering the risk of hardware failure, since it lacks mechanical and moving parts and therefore much less likely to encounter hardware failure under the constant server load. This is a very important factor in any use-case which needs reliability and uptime. A broken storage not only takes your VPS or server offline, but more importantly you will probably lose all your much valuable data.

Even if it is possible to recover your data from your hard-failed storage, most likely there will be considerable damage to your data, to your performance, and even to your reputation as website or business. That is apart from the considerable cost of recovering data from such failure-case, which will be several times more than the cost of SSD. This is a risk you just cannot take.

The most important factor is the cost. At first glance, an HDD VPS may seem cheaper than an SSD VPS. However, as I mentioned before the problem of storage as a performance bottleneck, in the end the HDD VPS will perform much lower than a counterpart SSD VPS.

Unless you intend to use your VPS mainly as a remote cold storage or just running simple services, that difference in performance will be so large that it will be like getting a similar SSD VPS with half the resources. In effect, all things considered, an HDD VPS will cost even more than a similar SSD VPS.