In Coding, What Are Differences Between Methods and Functions 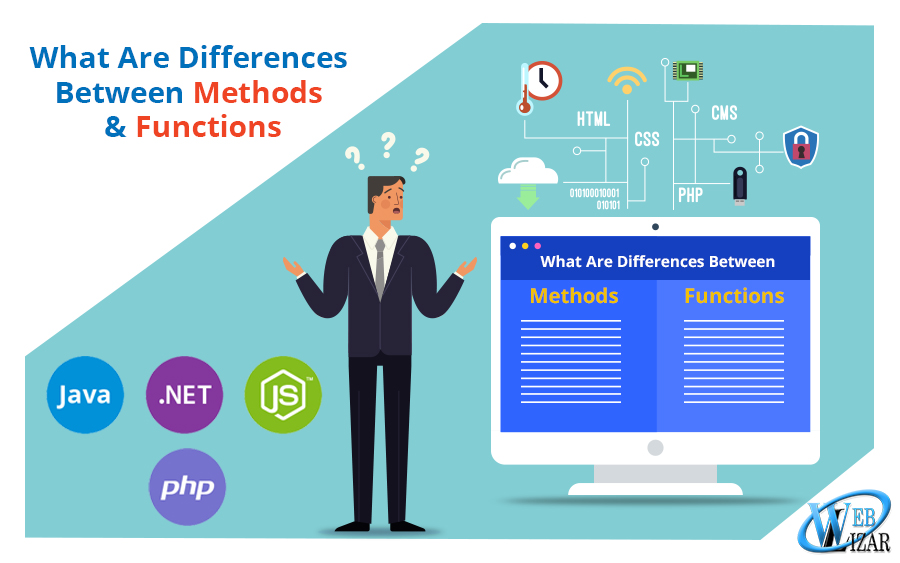 In programming, there are a lot of different terms that are used to describe the same exact thing and there are also some terms that appear to refer to the same thing but actually don’t. To make it even more confusing. Some terms are used differently depending on what kind of language you are talking about or even when going from one language to another language that is of the same type. Thus, some terms like, “method”, “function”, “interface”, or “abstract class” can be very confusing to some people As they can mean one thing in one context but a completely different thing in another.

Read – Which JavaScript Framework To Choose

A function, on the other hand, is a much more generic term that refers to a procedure that takes in a number of inputs and returns some number of values. Confusingly, a function and a method sound like they would do the same thing or refer to the same kind of procedure when programming, but they don’t. Functions are not associated with objects and are used in basically every high-level language that is not object-oriented. Methods on the other hand are only associated with objects and the term is only used when dealing with objects or when a procedure is within a class. So, functions return values based on the inputs given, whereas methods either alter the characteristics of an object or return values based on the object’s pre-existing characteristics.

An interface is essentially a base that you create that accounts for all of the similarities between classes. So, say you want to create different objects but that they are all animals. So, humans, apes, and chimpanzees. Obviously, these three animals have a lot in common, and it would be smart to define all of these similarities, so you can ensure that they are all implemented throughout each class. For example, each has a head, four limbs, a mouth, nose, tongue, etc.

Read – Reasons Why Laravel Is the Best PHP Framework in 2018

How to use abstract classes

Abstract classes are great. However if there are some identical characteristics that have identical ways of being implemented. But if there are also some that have different implementations across objects. For example, if you had two classes, men and women, and wanted to define similarities between the two, it may be best to use an abstract class. Why? Because certain characteristics between the genders are identical and are implemented in the exact same way. For example, the mouths are about the same size and serve the same purpose; the eyes are about the same size and function the same between the genders, etc.

Hopefully these explanations were not too confusing or wordy. If you are new to programming, don’t worry if you are still confused. There are plenty of accessible resources that you can use to understand the fundamentals of programming and the subtle differences between some terms.

It is very important mentioning that if you like to become a professional programmer. Leaning both procedural and Object-Oriented Programming (OOP) concepts are a must. Indeed. Many software engineers use Unified Model Language to map project or application requirements to objects and diagrams before they do OOP coding. There are lots of online resources for learning software engineering. For teenagers and high school students, High School Technology Services offers variety of hands-on training. For adults and professionals, Coding Bootcamps institute offers many basic to advance programming classes with focuses on both procedural and OOP coding.