Weblizar Blog - Update yourself with all the latest tech news revolving around wordpress all at one place The Importance of Web Design to Education - Weblizar Blog
Themes ($79) + Plugins ($59) = All Products Bundles ($99)
Grab it Now
HOT DEAL : 36+ WordPress Themes & Plugins Bundle with Lifetime Update & Uses Only $99 For more Detail to Click Here

The Importance of Web Design to Education 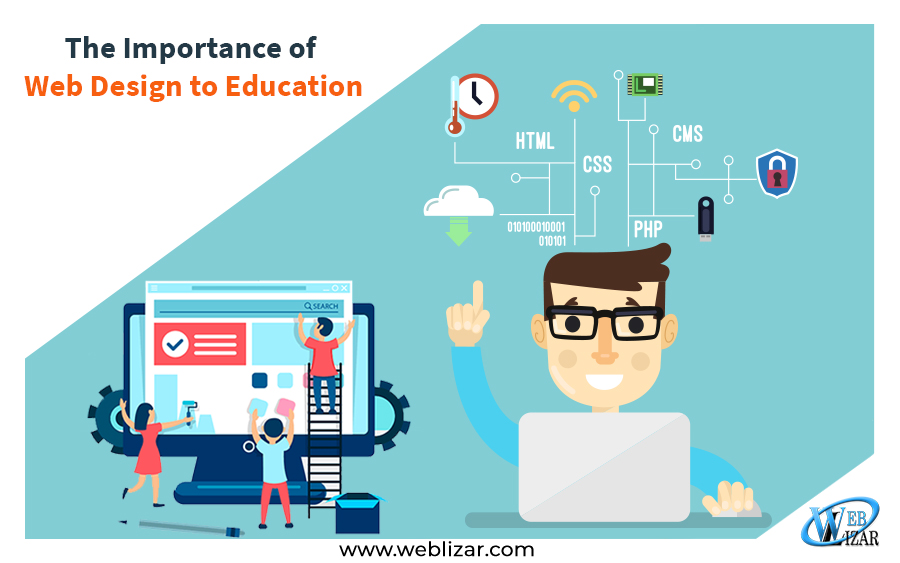 Learning how to create user-friendly web-sites, pages, apps, etc. is one of the most perspective directions of the education nowadays. Web design emerges with artificial intelligence, art, newest data regarding how people perceive this or that kind and visual embodiment of information. Learning web design is important, but web design itself is also important for learning. So, if a person is willing to continue his or her career or gen an advanced degree in Education this topic is a good base for the development.

It is important to begin with the history of web design in general. Web Design – a child of the Internet, although they were born almost simultaneously. The world’s first web page came to light on August 6, 1991, through the efforts of the British scientist Tim Berners-Lee, the father of HTML and much more. You can see the first WEB document now on the w3 website. The page was simply made in a form of a text with links, the design was not an issue then. The opportunity to improve the appearance of web documents appeared in 1993 with the advent of the first graphical browser Mosaic.

The opportunity to improve the visual perception of information has caused a growth of interest in this area of human activity. If at the end of 1993 there were only a few hundred sites, and their design was scarce — text, links, and a few drawings, then in 1996 the number of sites was counted in thousands, and bright colored backgrounds and animated GIF images were added.

After web design got more developed, the raising amount of universities decided to open their websites — to be present in the growing Internet network, to attract students interested in new technologies and to give information to the current students fast and efficiently. In many cases, university websites were operated by current and former students capable of dealing with the modern development of web-design and programming. It was the period when web-design skills started to be appreciated but still were much less used than even basic programming skills.

A qualitative breakthrough in web design occurred in the 2000s with the advent of CSS technology, which allowed separating the design of web documents from their content. Static sites, changing information in which was quite a difficult task, began to become a thing of the past due to the emergence of the CMS content management system. Websites have become much more functional, with a user-friendly interface. Since then the development became galloping, and web-design skills became one of the most well-paid.

Since the late 2000s, web design in education received a new life and a new purpose — online learning. One of the most popular ways of self-education, massive online education, is a rather new concept. Not speaking about the university websites with their programs, the first exceptionally efficient online educational website with a breakthrough web design was established in 2007 and it was Khan Academy. Now Khan Academy gives access to more than 4000 lectures which can be attended by anyone around the globe.

They have academic courses, which allow learning, for example, maths from the very beginning to the college level or higher. Web design plays a significant role in it. Edx, Coursera, and other massive learning websites appeared later, and without proper web-design, they wouldn’t be able to compete in the market.

Web-design is both a perspective branch of Education and a valuable part of education itself. Educational websites need student-friendly design and modern ways to present information in order to attract more users of any age and specific needs. Web-design connected with other practical sciences helps students perceive information faster, easier and more efficiently. Universities, online libraries, courses, etc. invest thousands of dollars in web-design because they know those investments will not be gone in vain.

Interesting article to read. I got something new and challenging in your blog. Also, hope you will keep on posting more update with us.