Weblizar Blog - Update yourself with all the latest tech news revolving around wordpress all at one place Is Influencer Marketing Still a Viable Strategy in 2021?
Themes ($79) + Plugins ($59) = All Products Bundles ($99)
Grab it Now
HOT DEAL : 36+ WordPress Themes & Plugins Bundle with Lifetime Update & Uses Only $99 For more Detail to Click Here

Is Influencer Marketing Still a Viable Strategy in 2021? 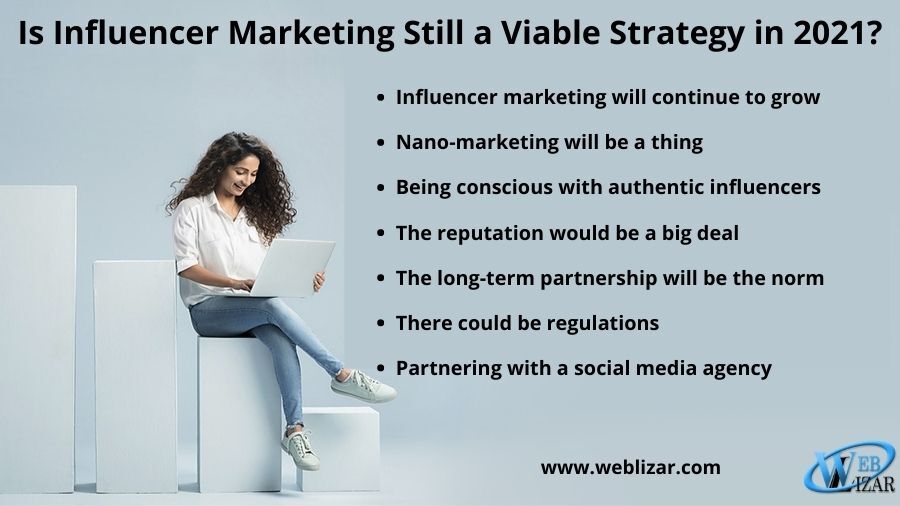 Influencer marketing will continue to grow

Since most people were at home in 2020 due to restrictions in many places, influencers became more popular. Many people who don’t have anything else to do could end up shopping online or watching videos on YouTube. It made social media influencers even more influential. 2021 will be the same. More people will turn to social media for information and entertainment. Therefore, these influencers will have an even bigger influence moving forward. There’s even a projection that influencer marketing could be up by 15% at the end of the year.

Nano-marketing will be a thing

Not all social media influencers have the same reach. Some of them are less popular than others. However, despite not having too many followers, they can still help businesses. Therefore, working with the lesser-known influencers would be a bigger deal in 2021. The good thing about working with them is that they have smaller but more targeted audiences. If the people following those pages are potential customers, the business will benefit from the partnership. Besides, these smaller influencers offer services at a more affordable rate. Usually, those who work with more prominent influencers are more established brands that can afford the advertising costs.

Being conscious with authentic influencers

When influencer marketing started, most businesses will only look at the numbers. If the influencer has a huge following, businesses wouldn’t mind starting the partnership. However, in 2021, most companies will become more cautious with the partnership. There will be an analysis of the quality of the followers. Some influencers have bots as their followers, and it’s up to 20% of the entire list. There’s no point in working with these influencers since they don’t necessarily have authentic audiences who can turn into customers.

The reputation would be a big deal

Some social media influencers increase their following because of being spontaneous. Coming up with ideas that are outside the box is entertaining for many people. The problem is that some of them can be a bit crazy. They continue to do things that might seem entertaining but are quite offensive. They can still attract attention and increase followers, but they don’t set a good example. Therefore, businesses don’t want anything to do with these influencers. They might adversely affect the brand. Sure, many people will know more about the business, but they will also associate it with the influencers. Instead of purchasing the products, they will change their minds. They might think that the company tolerates the terrible actions of the influencers.

The long-term partnership will be the norm

During the early years of influencer marketing, most business owners would think of the partnership as a one-off thing. Once the collaboration is over, they will move on. Others will start looking for a different social media influencer to work with. In 2021, the trend will be a long-term partnership. It means that businesses will continue working with the same influencer for a long time. It’s like working with a celebrity commercial model or ambassador. The partnership is no longer for a single campaign. There will be more collaborations to boost the business. Of course, the risk is that the chosen influencer might not be popular for a long time. The influencers’ brand might also change over time. It means that the partnership will no longer be viable. However, as long as the influencer is doing well and the business is satisfied with a partnership, it will continue.

There could be regulations

Social media influencers heavily depend on the number of subscribers and viewers. If more people watch the videos they put out, they will increase their potential salary. The problem is that when these influencers start to work with other brands for advertising purposes, there might be regulations. In 2020, these regulations weren’t too strict yet. However, in the future, there might be more policies that will affect influencer marketing. Therefore, business owners who want to work with these influencers have to consider the potential changes.
For instance, there are questions regarding the idea of false advertising. Some people think that these influencers don’t use the products that they are promoting. However, they still say a lot of great things about them. It might fall under false advertising related laws. If the government sees this as a problem due to potential deceit, it might affect how business owners work with influencers in the future.

Partnering with a social media agency

The good thing is that there are other ways to be more popular online. Working with influencers is an excellent idea, but it’s only one of the strategies businesses have to do. Choosing a reputable Chicago social media agency is one of the other options. With their expertise in social media marketing, it’s easier to succeed with the campaign. Social media is an excellent platform for advertising. Even without the presence of social media influencers, it’s possible to continue advertising through social media. Given the number of people who use this platform, it’s easier to reach them with the right campaign. Companies should try to weigh their options and determine which collaboration would be useful in boosting online presence.