Weblizar Blog - Update yourself with all the latest tech news revolving around wordpress all at one place Java 9 - All You Need To Know About The Features Of New Java - Weblizar Blog
Themes ($79) + Plugins ($59) = All Products Bundles ($99)
Grab it Now
HOT DEAL : 36+ WordPress Themes & Plugins Bundle with Lifetime Update & Uses Only $99 For more Detail to Click Here 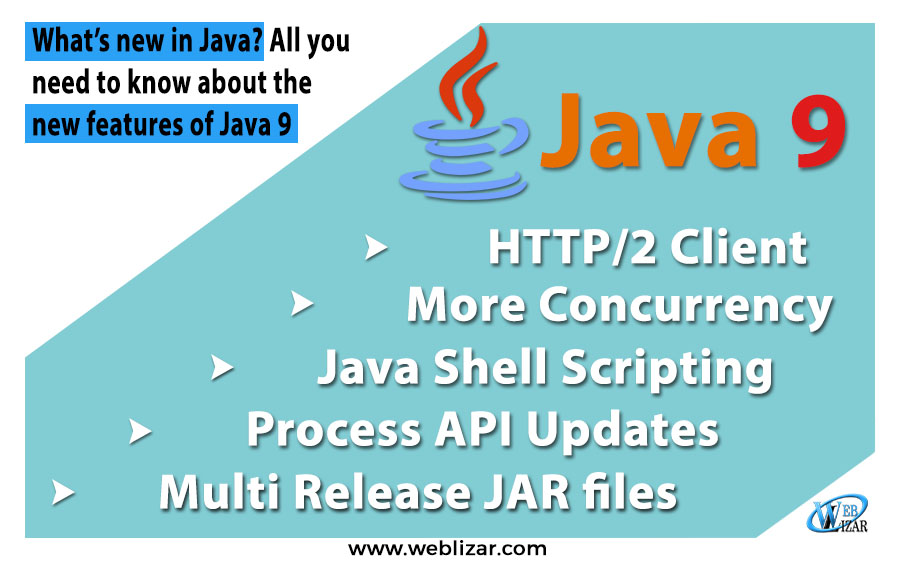 Java, the highly accessible programming language has been a no-brainer for developers across the globe. Ever since it’s inception in 1995, the language has seen wide usage across various industries.

Today, you will find Java on your phones. Powering Android OS and the myriad range of apps that Android offers. It is used for developing games like Minecraft which has a huge player-base. It also finds use in business applications like reading credit card information at shop tills and feeding the information between the systems and the banks.

After a gap of 3 years, Java rolled out its new edition – Java SE 9. With several key architectural changes and add-on features, Java SE 9 offers a powerful solution that developers had been yearning for.

Java SE 8 offered many structural changes that were received with mixed emotions by developers. Majorly, these are the shortcomings of Java SE 8 that Java SE 9 has tried to overcome:

So, let’s look at the key changes and enhancements that Java 9 offers over its predecessors

Traditionally, Java’s API has been primitive in nature. That support to launch new processes, redirect output and error streams. In Java 9, the new updates to the Process API enable:

This feature is expected to be reformed in the subsequent releases or may even be removed completely.
Previously developers would rely on the third-party libraries, for examles Apache HTTP, Jersey, and so many. The Java’s HTTP API predates the HTTP/1.1 specification and is synchronous and hard to maintain. These limitations called for the need to add a new API. The new HTTP client API provides the following:

Here is a code snippet to make an HTTP GET request using the new APIs. This is the module as defined in the file module-info.java:

The following code uses HTTP Client API. This is a part of jdk.incubator.httpclient module:

With Java 9, a new class called – java.util.concurrent.Flow has been introduced, which supports the implementation of a publish-subscribe framework. This framework enables developers to build components. These components can asynchronously consume a live stream of data by setting up publishers that produce the data and subscribers that consume the data. These are the new interfaces:

The goal of Project Kulla was to investigate the addition of the REPL (Read-Eval-Print-Loop) tool for Java 9. This release of Java features a special command line tool called JShell. The goal here is to popularize and maximize usage of REPL. So, what does that mean? Now, you do not need to wrap a few lines of code in a separate method to run them. Efficient? I say YES.
For instance, in Scala, a simple Hello World program is written as scala>println(“Hello World”);
Let’s run the JShell command, as shown in the following image:

The trump card of the new features in Java 9 is the aall-newmodule system. Creating complex systems often involves high level, complex codes which result in ambiguity. With code complexity, two fundamental problems are faced: Encapsulation of the code is difficult, and there is no notion of explicit dependencies between different JAR files of a system. Every public class can be accessed by any other public class on the classpath. This leads to unnecessary usage of classes that weren’t meant to be public API. Furthermore, the classpath itself is problematic: How do you know whether all the required JARs are there, and what about duplicate entries? The module system resolves both issues.
This is where the robust nature of Java 9 is seen. Modular JAR files contain an additional module descriptor. In this module descriptor, `requires` statements are used to express dependencies on other modules. Additionally, `exports` statements control which packages are accessible to different modules. By default, all non-exported packages are encapsulated in the module.

There are various JEPs, which are part of this project, as follows:

To leverage the new features of the Java platform on newer versions, the library developers must release a newer version of their library. Soon, there will be multiple versions of the library being maintained by the developers, which can be catastrophic. To overcome this limitation, Java 9 features multi-release of JAR files allowing developers to build JAR files with different versions of class files for different Java versions. Take a look at this example.

An illustration of the current JAR files as follows:

In the previous illustration, the JAR files supported class files for two Java versions 9 and 10. So, when the JAR is executed on Java’s version 9, the A.class under the versions – 9 folders are picked up for execution.

In my opinion, things are starting to change with Java. And this is a growing trend. Does it mean that popularity of Java and it’s used will be affected? Not at all. Java has been and still is an incredibly powerful and robust programming language in the tech industry today. Start learning Java and watch it make a difference in your career. Good luck!

Author’s note:
That tech article is contributed by Sumit which works on trending technologies such as DevOps, Big Data, and Python. And in Digital Marketing team at Edureka.