Weblizar Blog - Update yourself with all the latest tech news revolving around wordpress all at one place Oops, I Broke The Code Again​ - Weblizar Blog
Themes ($79) + Plugins ($59) = All Products Bundles ($99)
Grab it Now
HOT DEAL : 36+ WordPress Themes & Plugins Bundle with Lifetime Update & Uses Only $99 For more Detail to Click Here

Oops, I Broke The Code Again​ 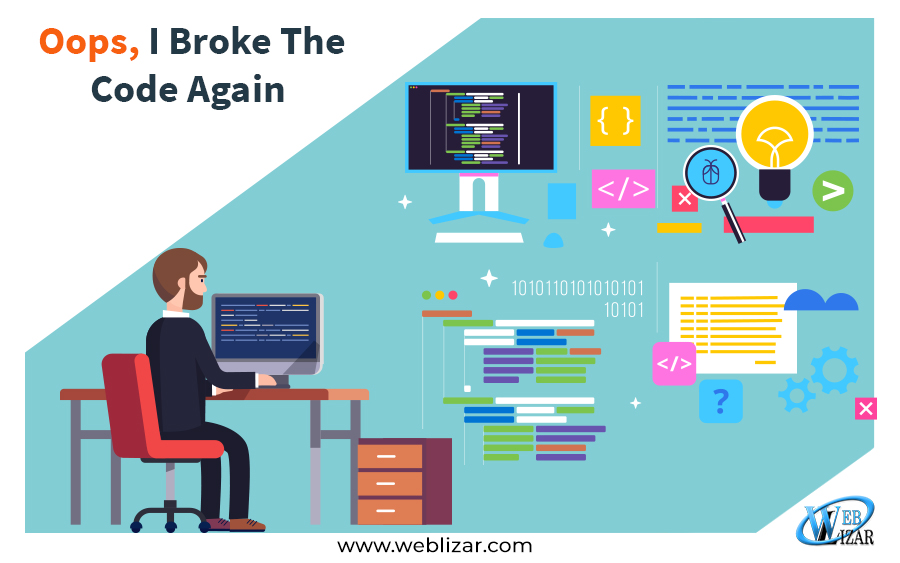 When you’re creating software for businesses or even the general public, things will go wrong. No technology is 100% perfect. Look at social media if you want to see a prime example. How many times is Facebook criticized for unethical practices or processes gone wrong?

The reality is that tech isn’t as reliable as we think it is. Even more so, humans are unreliable. Programmers make mistakes. Things happen. What matters more is how your company responds to a problem in a timely manner without burning bridges. Your reputation is the most important thing your business has. How are you going to keep it? Here’s what to do if you find yourself in an “oops, I broke the code again” situation.

Your first line of defense is to not break the code in the first place. I know this sounds painfully obvious, and it is, only it also isn’t. Having a strategy for testing, monitoring, and revising your code on an ongoing basis is the best way to avoid the catastrophe of dealing with broken code.

If you’re proactive, you can catch 99% of problems before they become actual problems. If possible, do all of these steps when developing code:

Log management – You should also monitor the server side of it, and for that, you’ll the log management solution. Send PHP logs to your tool and track user request seamlessly.

If you do all of the steps above, your odds of running into a problem are significantly lower. That’s something to be proud of, but don’t let it make you too comfortable. Problems sometimes slip through the cracks. Don’t panic, just follow the tips below.

2. Be Open About Data

No business wants to find themselves in a situation where user data is compromised. In 2018 alone, there were over 668 million data breaches in the United States. If your company is the victim of a cyber attack, you’re certainly not alone. However, how you handle this breach of data will determine whether or not your business will see the light of day. Many well-known businesses have damaged their reputations for good after a data mishap, so don’t let that happen to you.

Start with communication. Nobody wants to feel like they’re being lied to, especially by a company. Many businesses make the mistake of holding their information too close. They want to play their cards right, so they end up not playing them at all. Customers want to feel heard, and they want to know you’re taking steps to solve the problem.

If possible, start communicating early and often. Offer different levels of support to rectify the problem. There really is no easy way to admit to losing company data. Be honest about what data was lost and how this will affect customers. That’s the only way to turn anger into forgiveness.

While downtime isn’t great, it also isn’t the end of the world it’s often made out to be. Once again, good communication goes a long way. When problems happen and customers can’t get ahold of someone to find out what’s going on, that puts a big damper in their day and their relationship with the company.

In the e-commerce world, for instance, a shopping cart bug will lead to 20% of users abandoning their cart. That’s revenue down the drain. However, it’s much easier to win back that 20% of users by following up after the fact letting them know that the problem was fixed and that these concerns are not taken lightly.

Per usual, it’s about communication. Your customers aren’t businesses. They aren’t users. They’re humans, and those humans thrive off of communication with other humans. They understand that things happen. Downtime is just a part of being on the internet, and sometimes things don’t work the way they should. It’s how you react to these problems that will make a difference in your reputation.

The more you can learn from your errors, the better. Having a logging system to monitor your errors is only half of the battle. You also need a recipe for success when things do go wrong. Poor communication is the silent killer across industries, but especially with software and app development.

You can build the greatest software in the world, but if you can’t properly communicate with your customers, you’re doomed to fail. One large mistake that’s properly handled speaks higher than a minor mistake that’s covered up and ignored.

If you want to avoid the pitchforks in your support team’s inbox, start today by creating a strategy for when you break the code. Don’t expect that it’ll never happen to you. It will, and it’s only a matter of “when” not “if.” Are you prepared?