Weblizar Blog - Update yourself with all the latest tech news revolving around wordpress all at one place Things You Should Know Before Learning Python - Weblizar Blog
Themes ($79) + Plugins ($59) = All Products Bundles ($99)
Grab it Now
HOT DEAL : 36+ WordPress Themes & Plugins Bundle with Lifetime Update & Uses Only $99 For more Detail to Click Here

Things You Should Know Before Learning Python 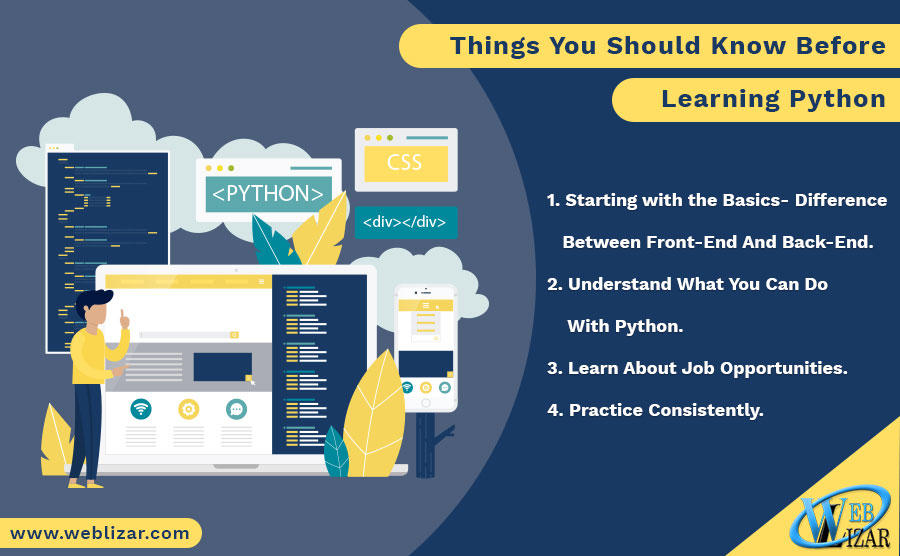 Python is one of the best programming languages that you can learn to boost your career. Many job profiles mention Python as a mandatory skill under the job description. By learning this language or taking a Python course that can help you understand the language better, you will be increasing your chances of landing a high paying job.

Many people assume that learning Python is a difficult task; however, that’s not true. In fact, Python has a smooth learning curve that makes it easy for the user to understand, learn and implement it.

But there are some things that you should know before you start your Python training.

1. Starting with the Basics- Difference Between Front-End And Back-End

If you come from a background of coding, you might be knowing what the difference between front-end and back-end is. But, if you are new to the world of programming, this might be a bit tricky for you.

When you visit a web page, whatever you see on it is the “front-end”. It consists of all the texts, images, videos, animations, graphics, icons, sliders, links, all of this is considered as the fronted for that particular web page. The front-end of a web page is built by mainly three programming languages: HTML, CSS, and JavaScript. Many people find coding in front-end easier as compared to the backed as it involves less number of complex coding and languages.

2. Understand What You Can Do With Python

Before you start taking a Python course, you should understand the potential of Python as a programming language. It is considered as one of the best coding languages to build the backend of websites. It can be used with machine learning tools, artificial intelligence software, for data analyzing, accessing API data and automating repetitive tasks.

Social media platforms like Instagram use Python’s Django framework to manage their CMS, while Instacart uses Python to run projections for the upcoming week for demand forecasting.

You can use Python for creating applications to simplify complex software development process as it is a more general-purpose programming language that is easy to work with.

Python is a programming language that is used worldwide across several domains and verticals. If you want to become a Python developer, you could easily bag a high paying job at a multinational firm. But, if hardcore coding isn’t your thing, you can venture into other career opportunities that do not require tight coding like that of a Python developer.

There are many different industries where you can work after learning Python. Right from data journalists, data scientists, data analysts, doctors, engineers, medical researchers to product managers, many people use Python on a daily basis.

Python can be easily incorporated with other technologies like machine learning, AI, predictive analytics, etc. You could work in marketing, business, technology, sales, design, and many other industries.

It is important that you constantly learn and practice how to code in Python. Consistency is the key to success when you are taking Python training. If you don’t have a technical background, it might seem a bit intimidating at first, but that shouldn’t stop you from learning. Many people tend to deviate and lose focus in the beginning days. If you stick through the initial phase, you will get to realize that Python is no rocket science.

Python is believed to have a smooth learning curve which aids users to understand and grasp its knowledge easily. Committing to coding every day will help you develop your muscle memory, which plays a huge role in the learning process. Start with 20 minutes in the first week and gradually increase the time.

These were some of the most basic and simple tips to use before learning Python. Now that you have a clear idea of what to do before you sign up for a Python course, go ahead and do your research about the things you want to know. Whether it takes one month to learn the basics of Python or four months, understand that you will get there if you put in your 100% constantly.