Weblizar Blog - Update yourself with all the latest tech news revolving around wordpress all at one place Why antivirus is Must Important for your Mac ?-Weblizar
Themes ($79) + Plugins ($59) = All Products Bundles ($99)
Grab it Now
HOT DEAL : 36+ WordPress Themes & Plugins Bundle with Lifetime Update & Uses Only $99 For more Detail to Click Here

Why antivirus is important for your Mac? 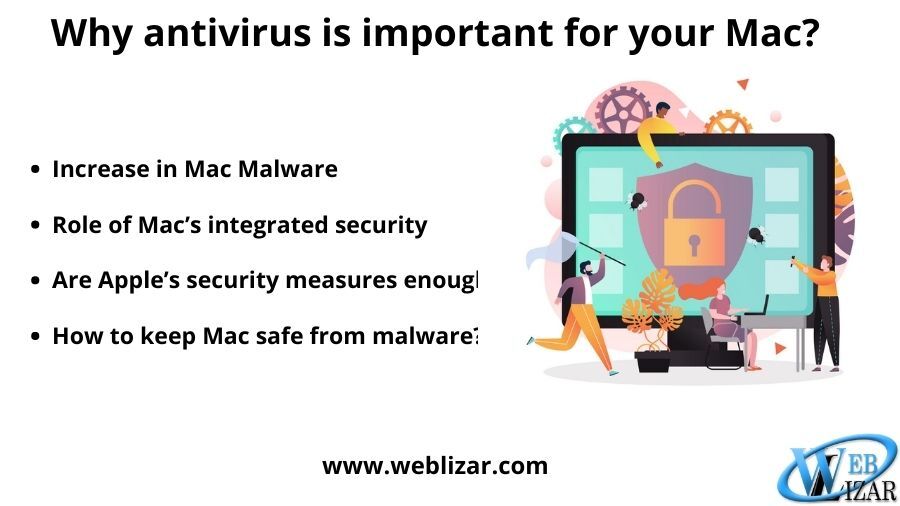 Most of us believe that Mac devices are safer than any other desktop devices available on the market. Although MacOS is designing to give users a safe and secure browsing experience, the fact is that no software is completely immune to a virus attack. Due to the growing popularity of Mac devices, attackers have made Mac a major target for malware. All Mac devices are equippes  with an exceptional built-in security system that does a good job in keeping them safe from unforeseen security threats. However, many third-party antivirus companies also offer antivirus packages that are specially designes for Mac devices. To help you in the process of choosing the Best antivirus for Mac, we will explain to you why an antivirus is important for Mac.

Although the threat level of MacOS is comparatively lesser than a Windows operating system, there are high chances of your Mac device to get exposes to one or more malware attacks. Recently, there has been an increase in Malware viruses affecting different Mac devices. One of the major reasons why cyber-criminals are trying to attack Mac devices is that Mac users are more complacent, due to the rigid security claims by the company. Regardless of a good reputation and several security claims from Apple, Mac devices cannot be completely perceives to be safe from all security perspectives. The growth in technology has resulted in several advantages and disadvantages. On one hand, digital giants try to upscale their operating systems and apps to enhance their security. On the other hand, cybercriminals are constantly finding new ways to induce malware into the system.

Apple has considered several security factors while designing the built-in security system for MacOS. All Mac devices are equippes with features such as XProtect antivirus protection and Gatekeeper. These features insist that all the software of MacOS is checked by Apple for any malicious code or security issues and are digitally signed. The main purpose of these features is to protect a Mac device when users download any software from outside the official App Store. Apple tries to protect its devices from malware by making it impossible for users to download infected files and install them in the system. Before users open a file, Mac checks it against a list of malware to check if the application is from an approved developer or no.

Mac uses Xprotect, a malware scanning tool, to scan all downloads. As this tool works automatically and invisibly in the background, it does not require any configuration. All these security tools are well-integrates into the MacOS and get invisibly updates from time to time. These security tools are similar to third-party antivirus software that is developes by another software developer. As these tools are already written on the operating system, they do not affect the speed of your Mac.  Users can control Gatekeeper by going to the Security & Privacy section under System Preferences. This will warn you before you try to download a malicious app from the App Store or its identified developers and will keep your device safe.

While there is no doubt in the level of security provided by Apple, there is a limited guarantee that Mac devices are 100% secure. In the past, there have been attempts by hackers to trick users and bypass Mac’s integrated security Gatekeeper. To make their way inside the MacOS, the hackers bypassed Gatekeeper by getting an approved developer signature or a certificate from a registered Apple developer. Apart from attacking different software, hackers have also found ways to attack the hardware of a Mac device. Thus, any vulnerability at the hardware level is likely to result in a hazardous attack that will find its trajectory to affect the complete system. In another instance, hackers also exploited the zero-day vulnerability in Gatekeeper.

Zero-day vulnerability refers to the threats which have only “zero days” to get fixes. Many times, authentic developers discover these threats and try to make available a 90-day deadline to get the system fixed. When the developer is not able to act in time, the threat gets exposed and damages the operating system to a major extent. While Apple takes these threats seriously and reacts quickly, there have been times when the company overlooked the identified vulnerability. Several computer experts have pointed out that Mac’s integrated security measures are not fully capable of picking these malware attacks. Moreover, these integrated security systems of MacOS also lag behind third-party antivirus software in stopping borderline programs from penetrating into the system. These borderline apps might not cause much harm to your device as compared to traditional malware. However, at times borderline apps might not give users a pleasant experience on their device.

How to keep Mac safe from malware?

While Apple takes enormous efforts to keep your Mac device safe, you too need to take some steps to ensure the security of your device. For example, users must only install updates when they arrive from legit developers, and do not click on any suspicious links appearing in emails. Additionally, you can install third-party antivirus apps specifically designed for Mac devices. As, at times, Apple does not quickly respond to some threats and malware, installing an additional antivirus will make your device less prone to security threats. This will also enhance the security and safety of your device and will protect it from any infringements. An extra antivirus on your Mac will act as a second layer of defence in addition to its core protection. Moreover, you can also keep your MacOS up-to-date by installing security updates as soon as they arrive.