Weblizar Blog - Update yourself with all the latest tech news revolving around wordpress all at one place 13 Skills You'll Need to be a Front End Developer - Weblizar Blog
Themes ($79) + Plugins ($59) = All Products Bundles ($99)
Grab it Now
HOT DEAL : 36+ WordPress Themes & Plugins Bundle with Lifetime Update & Uses Only $99 For more Detail to Click Here

13 Skills You’ll Need to be a Front End Developer 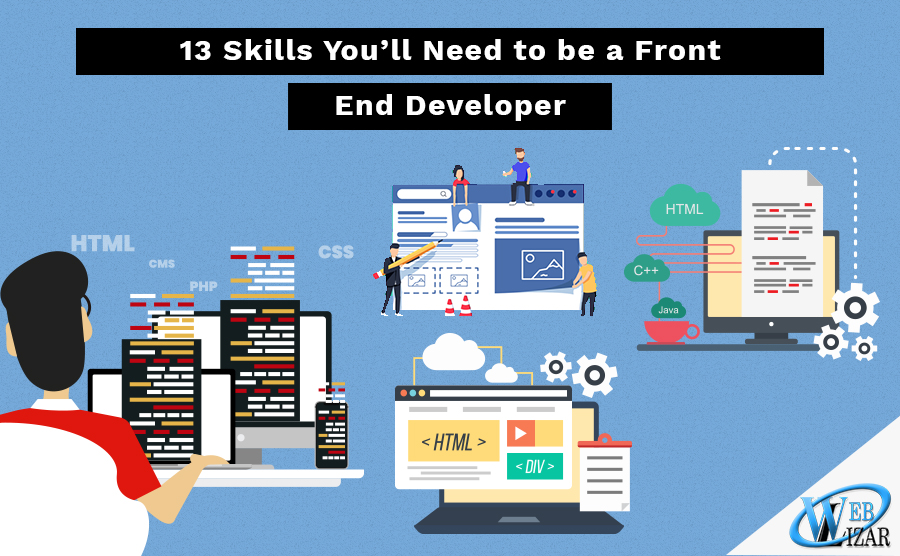 Front End developers are short in number currently as compared to job openings. The reason for that is the demand, these days the success of any application or website heavily relies on good front end UI and UX. An experienced front end developer with good skills is highly crucial to deliver a quality product.

So, keeping this in mind a front end developer has to constantly keep himself updated with new trends and has to keep adding to his skill set. Thankfully any new skill can easily be obtained nowadays via online courses, tutorials or certifications. There are numerous web developer certifications happening at any given time online.

13 necessary skills to be a front end developer

The most basic markup language is HTML, without HTML there is no concept of web development. It is like the basic building block of any website or web app. Altough most developers initially grasp a good understanding of HTML. But it is important to learn HTML in depth as there are some rare tags (eg; “cite”, “opt group”, “acronym”) that most developers have no idea of.

No front end developer can ever forget their first CSS code, be it as simple as changing the background color. CSS provides front end developer an instant joy, as they can see the results of their work instantly with CSS. Also, CSS has become very powerful with animations and transitions now. Today a front end developer’s first approach to fixing any UI bug is through CSS.

JS can be termed as the king of scripting languages. As there more frameworks and libraries in JavaScript as compared to any other scripting language. Even in pure vanilla form, Javascript is very powerful and it handles most of the functionalities of the client side. Needless to say, it is a must skill for front end developers.

A lot of event management and transition actions are handled by JQuery in front end development. JQuery which is a library of JavaScript provides you some predefined functions that you can use to implement some key features (eg; hide and show). Without JQuery, you will have to write these kinds of functions individually, which is a bummer.

There are various Js frameworks which make the life of a front end developer easy. As they have a lot of key features already builtin in available for use. One of such is Angular. It is a very widely used framework, and many organizations have made it their number one go to. Javascript has many such frameworks to choose from.

Front End frameworks are a combination of some HTML, some JS, and a lot of CSS. They help you in writing less CSS, as they provide some custom classes that you can use for styling. The most famous and widely used front end framework is bootstrap. It can be seen in many live websites. Having knowledge of bootstrap is very important in Front end development.

Preprocessors like Sass and Less let you write programming logic right inside the CSS files. This helps in conditional styling and defining themes. For example, if you have a color palette that you want to use throughout your all CSS files, you can define color constants in one file only and call them on any other file. Preprocessors have become an organizational standard and must skill.

Obviously when you’re working on a large project with a team then it is essential to have some kind of version control in place. All major changes are released in different versions with time. So, it is essential even for a frontend developer to have the know-how of any version control manager. Preferably most organizations choose git flow over any other.

Testing is a crucial part of the development life cycle. In most scenarios, you will find a front event developer writing the tests himself. These tests include UI and functionality tests. After a test fails and output is not what is expected then it is the front end developer’s job to find and fix that bug as well.

There are many extensions available on chrome and Mozilla browser that a developer can make use of. These developer tools help make the development process easy and convenient as you can find most of the required data or help within the browser using these developer tools.

A must skill to have in any field of programming. Problem-solving skill is what sets most developers apart from the ordinary. How quick a developer is able to solve a problem at hand with the best possible approach tells about the quality of that particular developer and his work.

Front end developers are imaginative and creative people. They have a clear picture in their minds regarding their work even before the work has started. They know exactly what they want to implement in the future, and whenever there is any hiccup in the process, creative front end developers come up with solutions or alternatives before anyone else.