Weblizar Blog - Update yourself with all the latest tech news revolving around wordpress all at one place 4 UX Mistakes Any App Developer Should Avoid - Weblizar Blog
Themes ($79) + Plugins ($59) = All Products Bundles ($99)
Grab it Now
HOT DEAL : 36+ WordPress Themes & Plugins Bundle with Lifetime Update & Uses Only $99 For more Detail to Click Here 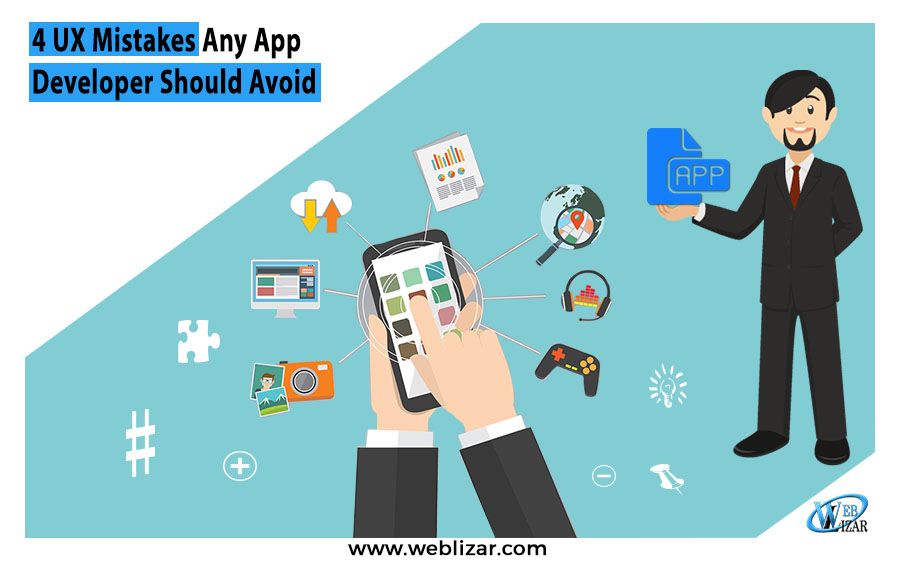 Mobile apps are now immensely popular. Between Apple and Google stores, over 100 million apps were downloaded in 2016. There were roughly 2.8 million mobile apps available on Google Play and 2.2 million available in the Apple App Store as of March 2017.

For companies, apps offer an opportunity to control and curate both content and user experience. This can enable companies both to deliver value to the customer and to achieve business goals, such as brand awareness and revenue generation.

Apps are becoming increasingly important for end users, and they are no longer about entertainment or providing information. Apps are now vital for managing our daily lives, making payments, calling a cab, ordering products, and everything else. Those businesses that fail to adopt apps risk falling behind. Just look at the rapid decline of the Macy’s department store, and who the winners have been:

Apps and the web don’t have to be a threat. The increasing use of apps is providing opportunities, but only those platforms that offer a great user experience (UX) will succeed. The fact is, many apps offer a terrible user experience, and as a result lose potential users.

Suggested Post: How to Hire a Web Developer For Your Business

On average, apps will lose as much as 90% of their daily active users after just one month of use. Users will give an app a try, but if the app doesn’t add as much value as expected, it’ll simply collect dust on the shelf, or will be deleted. Likewise, if the app provides a poor user experience and is difficult to use, it’ll be discarded. For app developers, it’s essential not only to get users to download an app but also to get them to use it regularly.

The features of your app are perhaps the most important single aspect. If your app offers a lot of features that add value, you’re more likely to be successful. However, make sure you don’t add too many features. Some app developers make the mistake of trying to be the “Jack of all trades,” and end up being the master of none.

Your app needs to have an identity, and it needs to focus on its core values. Think about a restaurant. When you go to a restaurant, the menu usually has a theme, say, Southern American or South Asian. If the menu was had twenty pages of food covering American, Asian, Latin American, African, French, and Italian cuisine, wouldn’t it be overwhelming? Further, would the cooks in the kitchen be able to cook so many different meals to perfection? Not likely.

The same is true for your mobile app. It needs to focus on a set of closely linked features. The app needs to excel at delivering these features in a user-friendly way. This means having a good user interface, efficient code, and a good overall user experience.  Once you have focused on a specific and targeted set of features, you need to incorporate them into your brand and brand identity.

Quite frankly, the user interfaces (UI) of many apps are often poorly designed, delivering a subpar user experience. The apps are difficult to use, and even if they add value, users have trouble unlocking that value due to convoluted UI. This will result in more people forgoing the app.

Every app needs to have an easy-to-use navigation system. This should seem obvious. No developer is going to intentionally develop a UI that is hard to navigate. And yet, so many apps feature poor navigation systems anyways.

Often, this is the result of the developer developing an app that makes sense to them. However, since they already know what they are trying to build, and are the ones building it, what makes sense to them often doesn’t make sense to end users. So, don’t develop the app UI for yourself, develop it for the end-users.

That’s why it’s vital to get honest feedback and input on the app’s navigation system. Testing should be frequent, and adjustments should be constant. In general, main features should be accessible in one click. Settings and customization should be hidden behind a gear icon or something similar but should be available nonetheless.

3. Build Your User Interface as a Team and Refine It Constantly

Sometimes mobile app development teams make the mistake of assigning the responsibility to develop the user interface to only one person. Sometimes, the basic user experience is drawn up right at the beginning of development. The early UI concept of the design becomes “the law”, and the developers continue to use it even if the initial concept doesn’t make sense.

As a result, features are often hard to access, and users struggle to find what they are looking for. As such, a UI should always be built as a team. Everyone should have a say. The more feedback you field, the more likely you are to uncover problems and shortcomings. Second, your UI needs to evolve as your app does. As you add or cut features, you will need to adjust your UI.

If you happened to have been around during the early days of the Internet, you might remember those loud, distracting banner ads stuffed with flashing lights and other distractions. Logging onto many websites was like stepping into a circus run amok. You were always the 1 millionth visitor, and you always had a dream vacation/car/whatever waiting for you. Just click here.

Most websites have since toned down their ads to be less intrusive and distracting. However, sometimes apps still make the mistake of overwhelming their users with too many ads. It’s tempting to think that more ads equal more revenues, but if the ads are so frequent and loud (visually and acoustically) that they drive away users, you’re likely to be losing revenue.

The same can apply to general content. Remember, mobile screens are small. Let’s say you’re trying to build a magazine app. Don’t try to stuff two dozen article titles onto your front page. Focus on the top four headlines that will engage readers. When users finish one of those articles, you can offer them more related content.

Suggested Post: How to be a Member of Apple Developer Program

When building an app, the end user must come first. If a developer develops an app without considering and prioritizing the end user, the risk of failure will increase dramatically. By focusing on end users and providing them with a great experience, you can improve the overall performance of your app. This will result in increased adoption rates and more success for your business.