Weblizar Blog - Update yourself with all the latest tech news revolving around wordpress all at one place 6 Promising Startups on Artificial Intelligence - Weblizar Blog
Themes ($79) + Plugins ($59) = All Products Bundles ($99)
Grab it Now
HOT DEAL : 36+ WordPress Themes & Plugins Bundle with Lifetime Update & Uses Only $99 For more Detail to Click Here 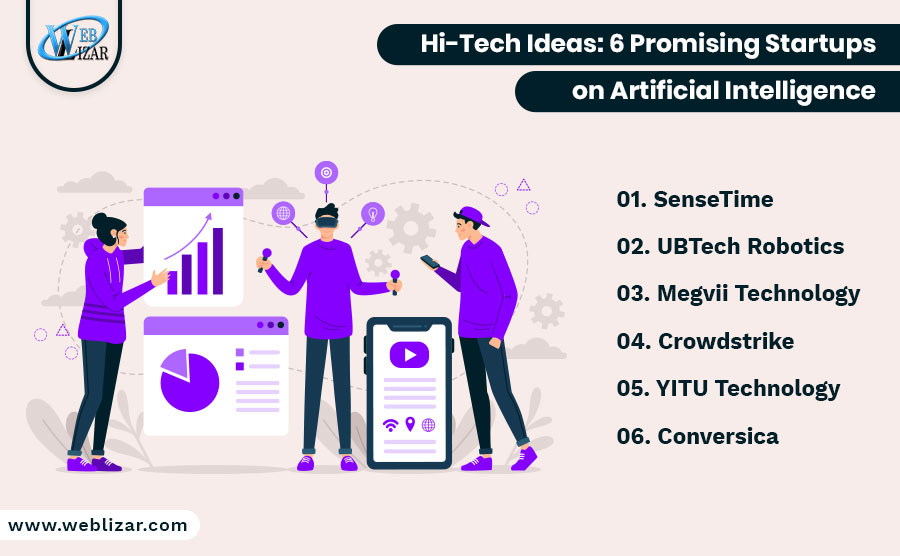 Digital technology is developing incredibly fast. What was impossible a few decades ago is now a reality. Today, you can easily buy a plane ticket to New York, or reserve under 21 car rental in Fort Lauderdale online. Artificial intelligence is one of the areas of modern technology and interest in its practical application grows day by day.

In recent years, there has been an increase in the field of artificial intelligence – the total investment has exceeded $ 1.9 billion. AI is the point of attraction for many technology giants: Apple, Amazon, Alphabet, Microsoft, Facebook, Alibaba, and Tencent are among them. Today they provide research in the field of AI and other high-tech programs. Often, large players acquire excellent startups. Let’s look at the most promising companies engaged in the creation of products based on artificial intelligence.

The company received $620 million in the second round of financing with an estimate of $4.5 billion and remains the most valuable AI startup in the world. In April 2018, the company has already engaged $600 million with an estimate of $3.5 billion.
Funds from Hopu Capital, Tiger Global, Fidelity International, Qualcomm Ventures and Silver Lake took part in the final round of funding. SenseTime will direct new investments to the development of research centers and the search for talented specialists.

SenseTime develops facial recognition and image recognition systems for working with large amounts of data. The company also works with police throughout China to help identify criminals in the crowd. SenseTime uses artificial intelligence to quickly analyze camera images and identify the person who has fallen into the frame.

The Chinese company UBTech Robotics uses artificial intelligence in its robots. The company develops a small humanoid robot Alpha 2, designed to help with housework and communication. Alpha 2 is in many ways similar to other humanoid robots of this class, but it has two important differences: the ability of social interaction with the owner and low cost. Its price is just $500.

The developers promise that the robot will be able to keep a personal calendar and remind you of planned events in a voice, communicate freely with a person and execute voice commands, take photos and post them on social networks, monitor home security and send messages to the owner, entertain children, and even pets, report current weather forecasts, search on the Internet and download applications.

Megvii received at least $600 million from investors represented by Alibaba Group and Boyu Capital.
According to Dataminr, which is an analytic platform that tracks information from open sources and predicts trends, the company received $130 million, resulting in total funding exceeding $180 million. In the last investment stage, the amount of attracted funding amounted to $391 million.

CrowdStrike Inc. was founded in 2011 by George Kurtz, Dmitry Alperovich and Greg Marston. It’s aimed to solve cybersecurity issues. Nowadays, it monitors cyber threats in more than 170 countries all over the globe.
One of CrowdStrike’s main products is the Falcon platform, which provides cloud-based information security. According to the company, its customers are three of the ten largest world companies in terms of revenue. Five of the ten leading financial institutions in the world, as well as three of the ten largest energy companies.

CrowdStrike has attracted more than $150 million in investments. The company’s average income is $27.3 million per year. CrowdStrike is headquartered in Irvine, California.

The products and services of Yitu Technology include the Yitu Dragonfly Eye intelligent security system. This system is based on machine vision technology designed to ensure urban safety, intelligent transportation and intelligent financial functions. Another product is City-Data Hub – solutions for optimizing urban transport management, and Smart Healthcare, which helps with disease screening and image diagnosis. The company also produces intelligent equipment that allows machines to see, hear and understand what is happening around.

China Merchants Bank uses Yitu’s face recognition technology at 1,500 of its banking locations. You partnered with Alibaba’s cloud computing division. To provide a cloud platform for a local police bureau in western Guiyang Province. The company has developed China’s first intelligent medical imaging platform that can provide a diagnosis of scanned patient data.

California-based Conversica is developing a cloud platform for organizing a dialogue between buyers and artificial intelligence. Communicating with customers via e-mail, an automated assistant engages them in a conversation in a natural language, identifies needs, and then transfers them to a live seller to make the deal, taking on the most routine and time-consuming parts of the selling procedure.
Such a smart assistant allows sellers to process significantly more orders and focus on the quality of closing a sale with a real buyer. Even after the sale, the assistant maintains contact with the buyer to attract his loyalty and encourage repeat purchases.

Hello Mudita, I really enjoyed to read your article and get so much information through your blog. Thanks for sharing information related to startups on Artificial Intelligence.