Weblizar Blog - Update yourself with all the latest tech news revolving around wordpress all at one place Bootstrap 3 vs Bootstrap 4 - An Overview - Weblizar
Themes ($79) + Plugins ($59) = All Products Bundles ($99)
Grab it Now
HOT DEAL : 36+ WordPress Themes & Plugins Bundle with Lifetime Update & Uses Only $99 For more Detail to Click Here

Bootstrap 3 vs Bootstrap 4 – An Overview 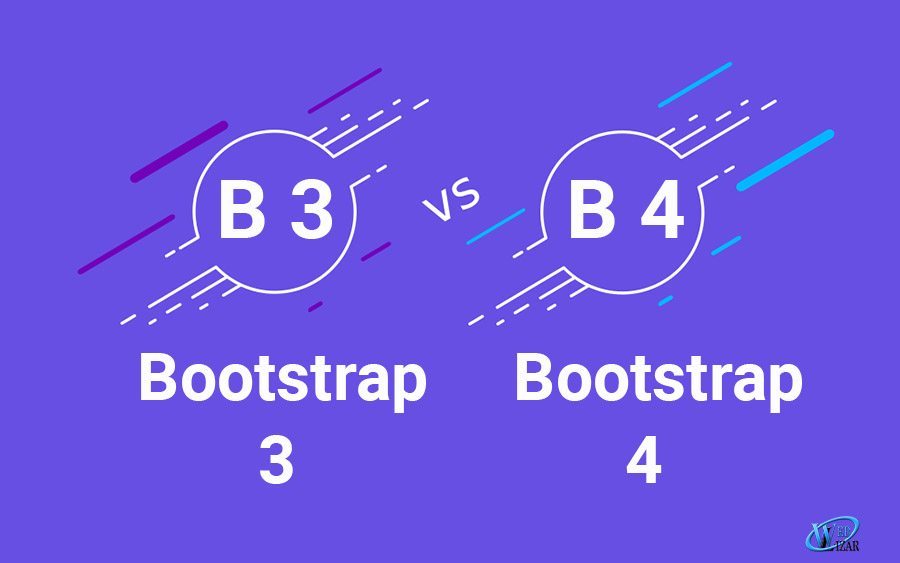 Bootstrap has been most trusted open source front-end-framework to develop responsive, mobile-first websites. Bootstrap is a famous framework, Why??? Because all it requires is the basic knowledge of HTML and CSS and we can build an attractive and functional website by using pre-defined classes of bootstrap which take care of responsiveness on different devices.

The center of attention of this post will be the key differences, additions, and subtractions from version 3 to the newly released version 4.0.0-beta.

What Is Different In Version 4 :

Now we can begin to talk about the new features of Bootstrap 4. As technology rapidly evolves, newer and smarter languages are developed to make building clean, fast websites much simpler. Such is the case with the newest release of Bootstrap. The team says that this “version 4 is a major rewrite of almost the entire project”. We will summarize some key changes of this improved.

Bootstrap 4’s major step towards improvement is its movement towards adopting Flexbox. As part of flexbox, included support for vertical and horizontal alignment classes. Bootstrap 4 positions a lot of emphasis on customization. It’s new grid tier system lets the Bootstrap 4 enjoy the presence of up to 5 grid tiers ( example of 5 tiers : .col-4, .col-sm-4, .col-md-4, .col-lg-4, .col-xl-4 ). One can easily say that Bootstrap 4 provides access to an improved grid system.

In Bootstrap 4, new utility classes have been included without hampering any existing functionality, whatsoever. Such important additions are as that of responsive text alignment classes, responsive floats, and responsive embedding. Apart from offering many shortcuts, these, respectively, allow for changing the alignment of the text, floating of the elements and the scaling of the aspect ratio of any embedded media. (example:.hidden-md-up hides an element on medium, large, and extra-large viewports. Now, instead of .hidden-md-up, use .d-md-none).

In Bootstrap 4, Navigation component has been simplified to a great extent. One is required to create a new list of elements employing the latest nav base class. There are some recent additions like nav-link class, nav-item class, and navigation bar styles also.

A Comparison Table of Bootstrap Version 3 and Version 4

As we already told that, Bootstrap team has rewritten the framework. So the above changes are only key changes we wrote here. To read in-depth please follow the link Bootstrap 4.

Should we migrate to Bootstrap 4 or remain on Bootstrap 3

We have talked about the features that Bootstrap 4 offers. We can see there has been a lot of work is done in optimizing and cleaning up unnecessary elements and classes throughout the entire framework. Bootstrap 4 promises to be much quicker and streamlined for even greater flexibility and ease when creating an awesome mobile-friendly website.

Bootstrap 4, moved to flexbox. This can be considered as one of the biggest and significant achievements. This will provide the following benefits: