Weblizar Blog - Update yourself with all the latest tech news revolving around wordpress all at one place How Internet Companies Grow Through Acquisitions - Weblizar Blog
Themes ($79) + Plugins ($59) = All Products Bundles ($99)
Grab it Now
HOT DEAL : 36+ WordPress Themes & Plugins Bundle with Lifetime Update & Uses Only $99 For more Detail to Click Here

How Internet Companies Grow Through Acquisitions 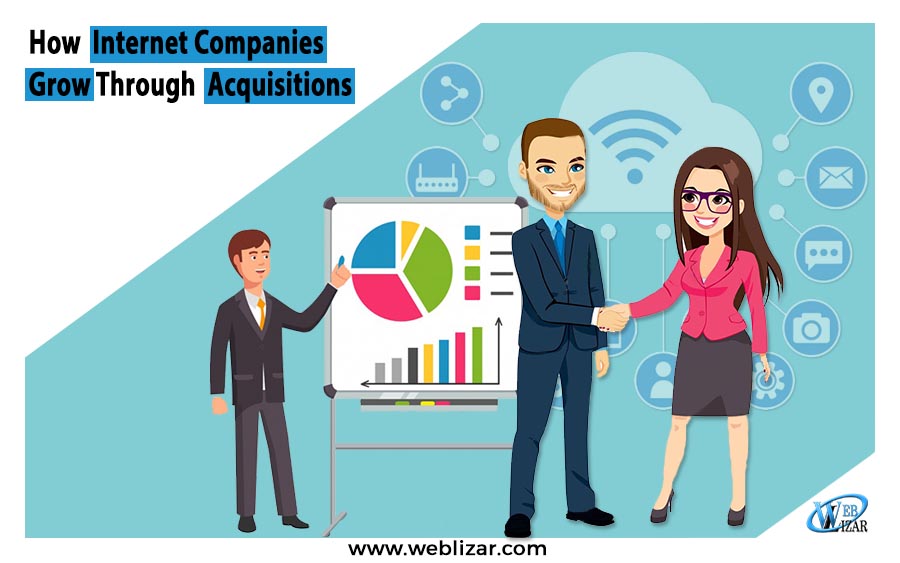 If I were to tell you that most of the internet’s biggest and best-known companies, websites and services such as Skype, PayPal and Instagram were all owned by other companies, you might not believe me, however, this is true.

Internet and tech companies are some of the biggest players in the acquisitions game and only a fraction of these companies run most of the internet.

Amazon, Facebook, eBay, and Expedia are some of the biggest acquisition-hungry companies and it forms the core of their long-term growth strategies. These companies want to be the biggest and the best in their industries, and it appears that they will stop at nothing to achieve this.

Let’s look at some of them individually.

Originally launched as an online bookstore by Jeff Bezos, it has now grown to be a household name worldwide. In fact, Bezos is really aiming for Amazon to become an all-around website which has everything for everyone.

Last year, Amazon made its largest acquisition yet of Whole Foods Market for $13.7 billion and there are rumors that it wants to take over companies in the retail, grocery and pharmacy markets such as Costco and Target.

Amazon wasn’t always about big acquisitions, though. One of its first ones was the Zappos company which operated in customer services and then Kiva Systems which has been rebranded to Amazon Robotics, now producing robotic systems for Amazon’s warehouses.

Other acquisitions include Audible – the audiobook website – and Elemental Technologies, whose video technologies Amazon has used for its cloud services.

Even Twitch, the video game live-streaming service, was bought by Amazon in 2014. Twitch has over 55 million paying users and is the 40th most visited website around the world.

eBay has spent billions of dollars acquiring a vast number of companies to expand its role and establish its place in the e-commerce world, which is now bigger than ever. eBay has a growing roster of acquisitions in the e-commerce market and it’s clear what their strategy is.

In the last ten years, it has acquired the RedLaser company  – a barcode scanning app – and spent $75 million on Milo, a website which tracks real-time inventory of more than 50,000 stores including Best Buy and Target. Other more recent acquisitions include GSI Commerce for $2.4 billion, an online services company.

eBay has a history of large acquisitions, some of which may surprise you. In October 2002, eBay bought payment processing service PayPal for $1.5 billion. This is quite possibly its most notable acquisition, given the fact that eBay’s main payment method is PayPal and that the majority of the world use this as their go-to online payment solution.

In fact, eBay even owned Skype once upon a time. In September 2005, eBay acquired the video-calling service for $2.6 billion but sold it on to Microsoft in 2009 for $2.75 billion.

The message to take away from these acquisitions is that eBay’s growth strategy is to acquire any and all businesses that operate in or around e-commerce or any business which products could be used for e-commerce purposes.

eBay also owns Gumtree, Magneto, and Braintree which are all e-commerce websites or have some relation to it.

Social media network Facebook is no stranger to acquisitions, either. By far, its most notable acquisition has been the photo-sharing app Instagram for $1 billion in April 2012.

At the time of the purchase, Instagram had 30 million users but made zero revenue whatsoever. Fast forward to today and it has over 600 million users and is a multi-billion-dollar advertising business. Although many people thought Facebook was nuts for buying Instagram for such a high price – especially when it didn’t make any money – they will look back and see it as a genius.

Purchasing Instagram is widely believed to be the reason why Facebook was able to go on and purchase WhatsApp and then Oculus, the virtual reality company.

These three major acquisitions by Facebook have helped the social network establish itself as a major player and the best place to go if you’re an entrepreneur and want to take your start-up innovation global.

Some major executives have since joined the Facebook team, including former PayPal President David Marcus.

Perhaps the most surprising of all, Expedia – the travel company famous for its competitive prices and tempting deals – has also made some major acquisitions in its time.

Expedia started off as a single entity; its purpose was – and still is – to help consumers compare prices for different travel components: flights and hotels for example. Its extensive search engine compares prices for hotels, flights, package vacations and even cars.

Some of its major acquisitions include HomeAway in November 2015, Orbitz in September 2016 and Travelocity in January 2015. The latter two are travel agencies. Expedia is clearly trying to be the leading company in the travel industry through its acquisitions.

Expedia’s acquisitions have included companies which services are similar to its own in a bid to establish itself as the market leader and hold a monopoly over the industry.

It’s clear for you to see now that there are much fewer companies on the internet than you think; most of them are being operated by larger companies. All individual companies are eagerly wanting to expand their empires across their respective industries to establish dominance and form a monopoly.

These four companies aren’t the only ones making major acquisitions, though. Take a look at our infographic below and discover for yourself which other companies are creating monopolies in their industries through acquisitions.