Weblizar Blog - Update yourself with all the latest tech news revolving around wordpress all at one place Read This Before You Decide to Use Open Source on Your Next Project
Themes ($79) + Plugins ($59) = All Products Bundles ($99)
Grab it Now
HOT DEAL : 36+ WordPress Themes & Plugins Bundle with Lifetime Update & Uses Only $99 For more Detail to Click Here 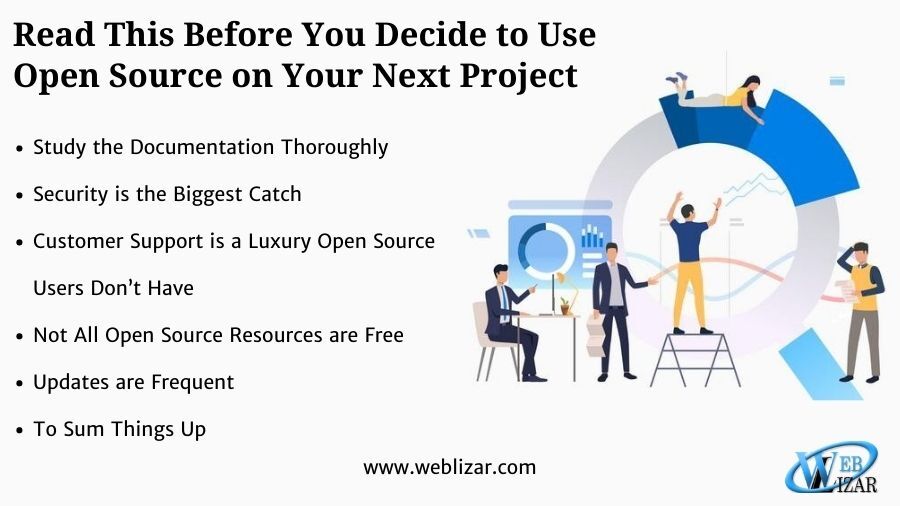 Open source is one of the leading sources of innovation in the field of software development.
There can hardly be a software development project that does not make use of open source technologies and components. The main driving force behind such extensive use of open source technology is that everyone cannot afford to use proprietary components. If you want to develop everything in-house, that would be even more expensive.  Thanks to open-source, developers don’t have to reinvent the wheel and can innovate and get creative with what is already there in the market. If you are a developer, using open-source components can be helpful.

They are not only cheap but also highly compatible and easy to deploy. No need for having a license is an added benefit, of course. But before you get startes with open source, you need to know some basic things about open source technologies and components. This way, you can avoid the pitfalls that are abundant in the open-source environment. Here are the things that you need to consider when considering open source:

This applies to literally anything in the world. Whenever you get something new, whether it is a car, a computer, or a piece of software, the first logical thing to do is to study the documentation. This will make it possible for you to make the most out of that thing while keeping the probability of any potential problems the lowest.
Did you notice the word ‘study’ instead of ‘read’ in the first paragraph? That’s because merely reading the documentation is not enough. You need to study it like you’d do for an exam and develop a thorough understanding of everything that’s there to know about the open-source component or technology you are going to use.
Once you have all that information and understanding, you can make the most out of it.

Security is the Biggest Catch

One of the biggest concerns when using open source components on your projects is that of security. As the name suggests, open-source is OPEN for everyone. As soon as a new version of any open source is release, exploitation of vulnerabilities in it is not a question of if but that of when. However, that does not mean you should just walk away from open source. You need to keep an eye open for the vulnerabilities. Keep in touch with any forums about the components you are using and relevant news. One of the best things that you can do to ensure open source security is to use an open source vulnerability scanner. These programs are designe to detect any vulnerability that can compromise the security of your product that makes use of open-source entities.

These scanners have a database of known vulnerabilities and can detect any of them in your code. To make sure your security is impenetrable, run a scan every time you make the slightest change to your code.

Customer Support is a Luxury Open Source Users Don’t Have

Open-source software and components are mostly offered free of cost. That means that the developers behind it are not making any money from it. To provide customer support services, the developers need to have a steady stream of income from the product which they do not have in the case of open source. Once you start using an open-source component, you are on your own, most of the time. However, there are some developers’ or third-party forums where you can share your problem and ask for help. This is not as effective as proper after-sales customer support but you can definitely get some help.
If the component you are using is not a very popular one, the chances of such forums will be slim. Such components are often made to be as simple as possible so that developers can sort things out and solve problems if need be.

Not All Open Source Resources are Free

In the software world, open-source and free are often used interchangeably but that is not always true. There are some open source technologies that offer a free or ‘community’ version of their products that has just the basic functionality. To get all of the features, you’ll have to pay or ‘donate.’ This is, obviously, done by the developers to make a profit on their products. The benefits you get by paying for the ‘premium’ version of these open source technologies include customer support and more features. However, you don’t always need to buy the full or premium version. If you can make do without the extra features and customer support, you can use these things for free.

HOW TO EDIT PDF FILES WITH EASEUS PDF EDITOR?

The frequency of updates in open source components is more than any other commercial software or tool. This is because being open source means that people will try on their own to modify or improve them. This innovation can often lead to something even better than the original being made. More established and well-known open source technologies have entire communities built around them. These people keep trying to improve the product.
You need to keep an eye for updates not only because they offer newer features and enhanced functionality but also make the components more secure too.

To Sum Things Up

Open source is a great way of making software with the minimum possible amount of effort. It is mostly free and is highly compatible, meaning it can work in any environment. However, security is a major concern when using open source owing to its easy-to-access nature and the fact that people with malicious intentions can very easily exploit any vulnerabilities. However, frequent use of open source vulnerability scanners and installing updates as and when they are release can make sure that your software using open source components remains secure at all times.