Weblizar Blog - Update yourself with all the latest tech news revolving around wordpress all at one place Social Media Trends in 2018 For Successful Businesses - Weblizar Blog
Themes ($79) + Plugins ($59) = All Products Bundles ($99)
Grab it Now
HOT DEAL : 36+ WordPress Themes & Plugins Bundle with Lifetime Update & Uses Only $99 For more Detail to Click Here 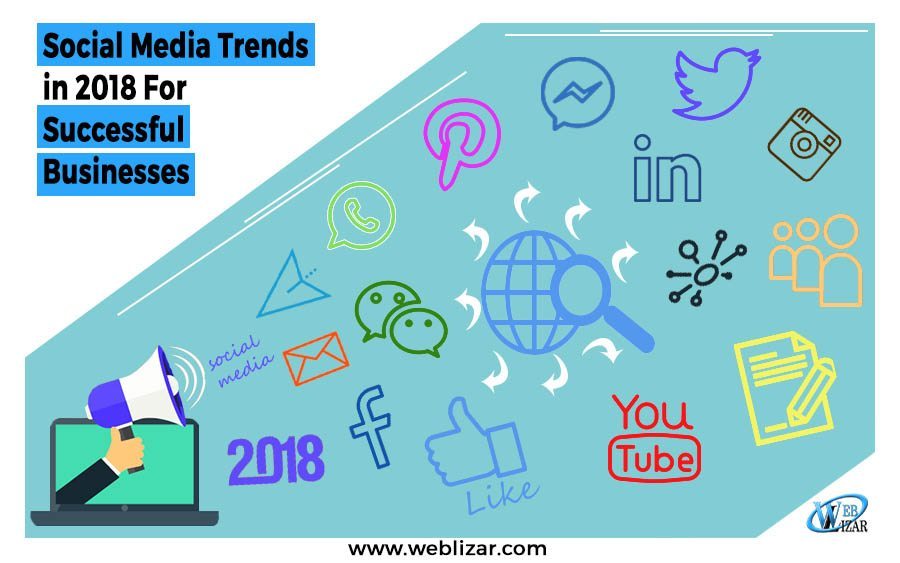 2017 has raced passed us. Almost. As the year’s end approaches certain social media trends in the waning year have become obvious. For that reason, Filmora’s team has conducted a thorough research about the social media trends that 2017 has brought and that will undoubtedly continue into 2018, therefore being ready for them will ensure the continued growth of your business.

Filmora’s infographic shows, that the video is in high demand, but so is the ephemeral content and a number of other social media phenomena that can no longer be ignored, because they attract the attention of millions of Internet users.3

Does the Future Belong to Artificial Intelligence?

Most of us have seen Steven Spielberg’s ‘A.I.’ a science fiction masterpiece from 2001. Only sixteen years later, the notion of artificial intelligence doesn’t seem like a distant dream reserved for Hollywood’s blockbuster movies. As the statistic shows, currently there are more than 11.000 hundred bots on Facebook messenger and it is anticipated that as soon as 2018, 30% of all online conversations will be with chatbots.

This staggering information is accompanied by an, even more, mind-blowing statistic which suggests that nearly 80% of Chatbots can be used to provide non-stop services to customers. Even if this number wasn’t so high, it still means that an increasing number of brands that want to remain competitive in the market will choose to utilize the services of Chatbots in 2018.

More and more brands make the decision to participate on messaging platforms such as WhatsApp or WeChat each day and by the time 2018 begins, this may become one of the most popular methods for online promotion of services and products. The so-called ‘Dark Social Channels’ has taken up as much as 69% of the entire worldwide communication between brands and their potential customers. The automatization or the usage of Chatbots will increase the number of companies that decide to reach out to their clients through dark social channels even more in the upcoming year.

The Generation Z and the Emergence of Augmented Reality

The new generation has arrived and failing to meet the demands of the growing market, they are creating, can prove to be a bad business decision, since the Generation Z already makes up for 31% of all YouTube users and 11% of all Facebook users. Their financial power will continue to grow in 2018, which means that adjusting your products to the needs of the upcoming generation might turn out to be financially beneficial.

Alongside the new generation, a new technology has emerged that promises to play a significant role in the future of social media. The Augmented Reality has come a long way since Google Glass was first introduced in 2013, and in April 2017, Facebook’s camera effect platform started offering support for AR hardware. SnapChat has also announced that they will launch a new AR based platform that features works by a renowned contemporary artist Jeff Koons in December 2017.

Augmented Reality was designed as an unconventional tool for establishing a stronger bond between companies and customers. The recent additions of AR features to some of the most popular social networks today suggest that this technology may play a significant role in the future of online promotion of brands and their products.

Brands that want to continue growing will certainly benefit from the data featured in the Infographic below, so scroll down and start gathering valuable information. Make sure to let us know what you think in the comments section and hit share to tell your friends about this amazing infographic.

Great site you have here.. It’s difficult to find excellent writing like yours these days.I honestly appreciate people like you! Take care!!

Social networking has taken SEO trends and techniques to a whole new level, businesses get to know more about customers and their needs than ever before. Very informative article ever.