Weblizar Blog - Update yourself with all the latest tech news revolving around wordpress all at one place WooCommerce vs. Shopify: The Difference and Similarities
Themes ($79) + Plugins ($59) = All Products Bundles ($99)
Grab it Now
HOT DEAL : 36+ WordPress Themes & Plugins Bundle with Lifetime Update & Uses Only $99 For more Detail to Click Here

WooCommerce vs. Shopify: The Difference and Similarities of the Two Ecommerce Giants 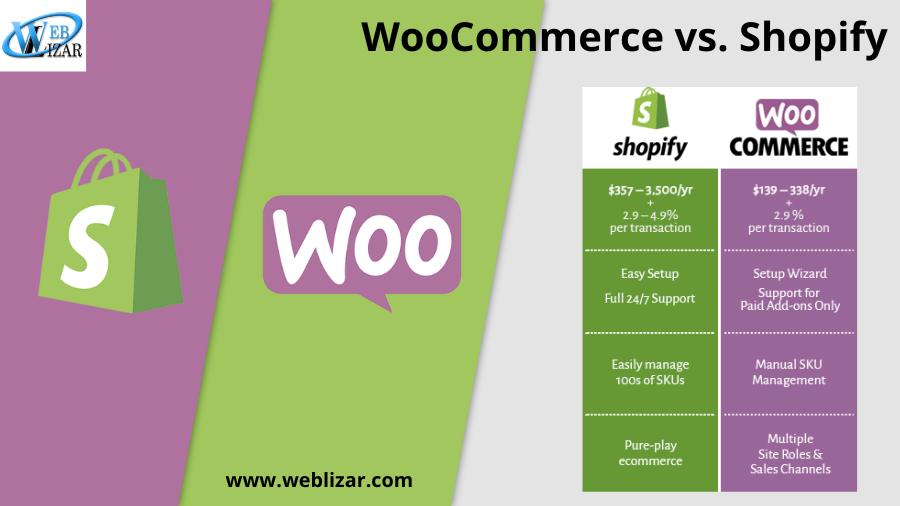 WooCommerce vs. Shopify is two ecommerce giants. WooCommerce claims to the most popular web giant, while Shopify powers more than 800,000 online stores. But which is the best one for you? Shopify is a reliable, easy to use, and powerful, which offers a lot of customer support and lovely templates to its customers. You simply need to pay a premium fee every month to get a solid platform. WooCommerce is a plugin that makes any type of WordPress site a powerful online store. It serves as an open-source platform wherein you can install anything freely, which makes an ideal cost for users; however, you need to pay for other things like security and hosting. Through WooCommerce, you will be able to create an enormous online store if ever you know how to code. In this article, will tell you which of the two Ecommerce giants suits perfectly for your business.

1.Pros and Cons: WooCommerce vs. Shopify

2.Ease of Usage: WooCommerce vs. Shopify

WooCommerce is much more difficult to learn than Shopify. Shopify is easier to use with regular use because it is a hosted ecommerce platform. It means that in order to make a store operational, there is a need for you to care on a lot of technical sides. There is no need for you to manage, install, or update any software in Shopify as well as in its security and backups. On the other hand, WooCommerce needs to have some legwork to do, such as sourcing your own security and web hosting. The use of Bluehost is well recommended because it can help power up your store.

Shopify will help your store live faster than WooCommerce, especially when you are starting from scratch. You can easily and quickly make your store come alive using your own hands because it can give you a wide range of themes to choose from and edit. Unlike creating your store through WordPress, wherein the process is manual, while in Shopify, all the things that you need are already found in one place.  WooCommerce fits well to those users that are not into immediately gaining masses of sales. Building online stores in WooCommerce is more of coming up with a more creative project than with Shopify because you will be able to have a lot of creative control, which will make your site your own.

4.Themes and Design: WooCommerce vs. Shopify

Both WooCommerce and Shopify have a stylish theme that will give your store a professional fesel and look because the looks matter a lot when it comes to the website world.
The theme store of Shopify comes with more than 70 paid and free themes that you can choose from. The themes available in Shopify are polished because their designs will definitely help you sell your products.The entry themes of Woo Commerce Storefront are responsive, especially on mobile devices. It also offers a fresh and clean layout. The look of your design in WooCommerce depends on your willingness on how you put it as well as the level of your technical skills.

Both WooCommerce and Shopify offers features that can help in building an effective website for your products and services. Neither of the two will let you down when it comes to selling online.

6. Integrations and Plugins: WooCommerce vs. Shopify

Both Shopify and WooCommerce can be installed apps in order to add more functionality in all the aspects of your business like SEO, shipping, and marketing.

Shopify runs a lot of email campaigns using apps like Constant Contact and Seguno, while WooCommerce relies on plugins when it comes to its email campaigns with the help of MailChimp. Shopify is connected with several multichannel selling like eBay, Pinterest, and Amazon, while WooCommerce integrates your online store with Instagram, eBay, and Amazon and advertises with Facebook for free.

Both WooCommerce and Shopify provides you a choice of more than 100 payment gateways. These integrations may be built in or added. Some of these are PayPal, Stripe, Square, debit and credit card, Apple Pay, and so on and so forth.

When it comes to SEO, both WooCommerce and Shopify make sure that the products you offer appear to the right people.

Security takes good care for you in Shopify because it is in charge of handling security breaches while WooCommerce works well with WordPress, which makes it self-hosted.

WooCommerce vs Shopify customer support comes close because of BlueHost. Shopify gives a 24/7 support on live chat, over the phone, and through email.

When it comes to pricing, Shopify has a higher price, while WooCommerce is more affordable. Shopify cost from $ 29 up to $ 299 every month, while WooCommerce comes free but with extra costs for a domain name, hosting, and security.

Today’s winner is Shopify; both of them are excellent platforms. In order to make your website more productive, it would be best if you will have your WooCommerce themes for your website that can add up to the success of your business.

I just loved your content.
Very informative Blog it is. thanks for sharing this to us.