Weblizar Blog - Update yourself with all the latest tech news revolving around wordpress all at one place 5 Best Practices in API Automation Testing - Weblizar
Themes ($79) + Plugins ($59) = All Products Bundles ($99)
Grab it Now
HOT DEAL : 36+ WordPress Themes & Plugins Bundle with Lifetime Update & Uses Only $99 For more Detail to Click Here 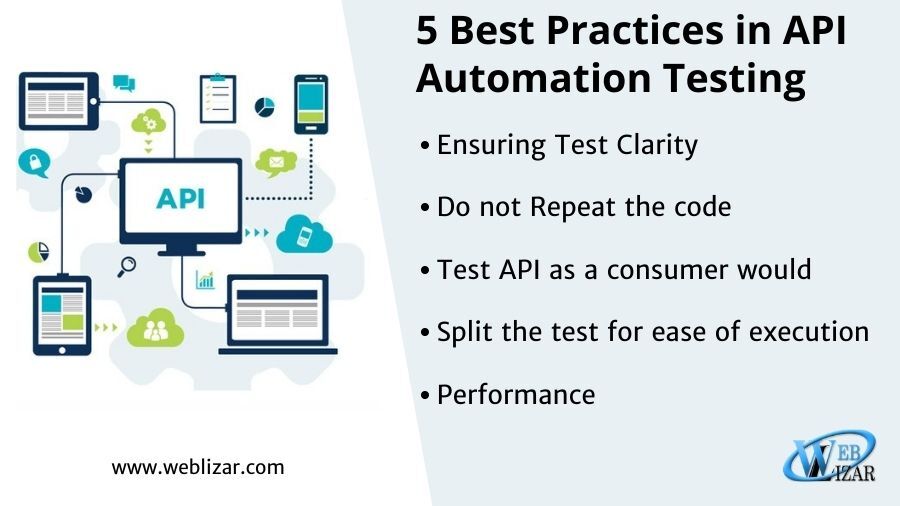 APIs (Application Programming Interfaces) enable software development teams to connect and participate in end-to-end business processes with ease. Web apps and services rely on APIs. However, the performance of these end-to-end operations is limited by the APIs they rely on.  It’s difficult to create API automation testing and QA pipelines for web services. There are many issues faced by testers while automating APIs like unreliable and inconsistent tests, and large system errors are difficult to isolate and identify, bug fixes also take a long time to fix.
Setup and teardown procedures can leave behind test data that can affect future tests and production systems. So to overcome all such issues, there are 5 best practices that you must follow for API automation testing:

It is critical to developing unambiguous tests that enable troubleshooting while writing tests for automation or frameworks. As a result, you won’t have to pay attention when the tests are running and failing because the flaws will be obvious. This not only saves time but also ensures that the automation is successful and productive. At the same time, you can make a list of causes for failure, such as faulty frameworks, test environment issues, feature faults, or unstable product or application situations. Also, examine the other components of the application.

Before you start creating tests, ensure you have a client for the system you’re testing. Avoid repeating code because many tests necessitate dealing with the same components or performing similar actions. In these situations, you might wish to create a common library to wrap the test requests and make the procedure as simple as possible.

3. Test API as a consumer would:

If you’re testing an API, you should approach it as if you’re a consumer. When writing test suites, we sometimes emphasis what we believe to be the correct response. To thoroughly test all of our API endpoints, we must simulate the kind of faults that a user might make deliberately or unwittingly. To put it another way, we need to think like users. After all, things rarely break in predictable ways in a live environment; therefore, testing as though we’re already there is critical.

4. Split the test for ease of execution:

Understand that these are the essential elements of a good test automation plan. Splitting the tests is recommended to make implementation and tracking easier. The first tests would be to set up the testing environment and resources. These tests may fail, but they will aid you in identifying flaws in the first round. When the execution begins, a separate set of tests assists you in verifying the expected outcomes or behavior from the application or API. The tests are erased or reset by the system resources during the post-test step. Modifications may be made to get specific effects or to test certain API behavior.

API testing should be used to maintain track of API performance. These tests can be set up to track availability and speed concerns and can analyse the data gathered over time to spot performance trends. Although simply testing for availability is insufficient, most API transactions entail data exchange, making it critical to confirm that the data is accurate. You may also verify that the APIs are working correctly by checking the inputs and ensuring that the data is structured correctly. Test the functionality of new deployments to catch issues before they affect real-time users – while releasing new features, and it’s critical to assess the impact on current API interfaces.

If the modifications in the program do not work with the APIs you use, the programmer may slow down significantly or even crash.

— API endpoint monitoring allows you to spot outages or performance issues immediately. This has a low impact on end-users. To ensure that performance is not impacted, test all of the application API dependencies. Because API dependencies are regularly improved and updated, it is advised that you test them frequently when you have numerous APIs built into an application or provide APIs with that interface with applications that use multiple APIs.

Ensure that you follow these best practices to make the testing process quicker, smoother and much more efficient.