Weblizar Blog - Update yourself with all the latest tech news revolving around wordpress all at one place Why Frameworks Are Vital Tools For All Pro Programmers
Themes ($79) + Plugins ($59) = All Products Bundles ($99)
Grab it Now
HOT DEAL : 36+ WordPress Themes & Plugins Bundle with Lifetime Update & Uses Only $99 For more Detail to Click Here

Why Frameworks Are Vital Tools For All Pro Programmers 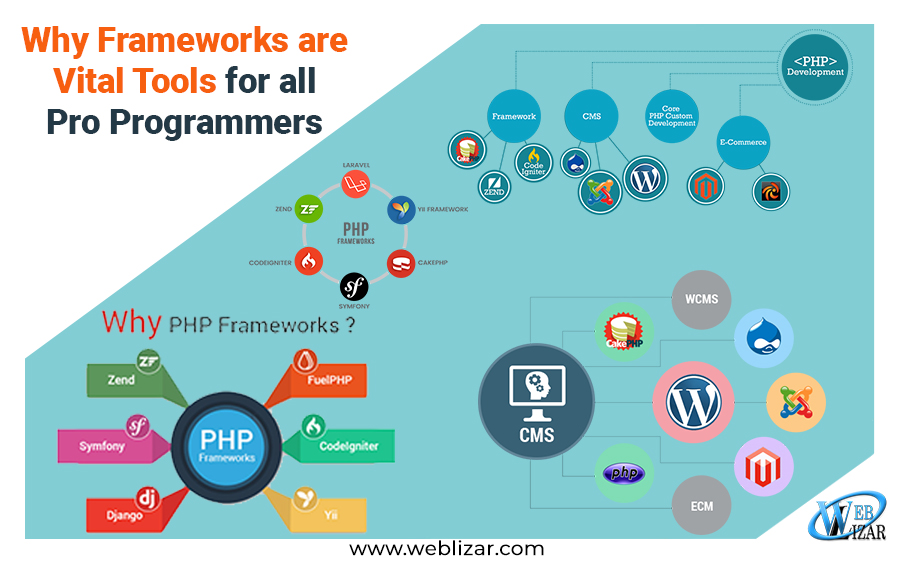 What are coding frameworks?

Frameworks can be a bit tricky to understand if you are someone who has never developed or used one. For those who wish to learn more on coding and technology career, I suggest reading IT career roadmap article. Like how high-level programming languages add abstraction so that we aren’t all programming in binary, frameworks add abstraction to high-level languages. Most of the time, the intention of developing a framework is to make the life easier for another developer trying to create a certain task. So in a way, you can think of a software framework as code that makes developing software easier.

It can be a bit confusing at first, but some simple examples should clear it up. Imagine you are creating a game. You want to be able to place a “block” on the screen, so that when a character stands on it, they don’t fall down. If you are using a game development framework, instead of coding where to put the block, you could just type in a text field the coordinates you want the block. The framework looks at what you typed in and does the rest. There is essentially no coding that needs to be done. Now, most frameworks do not add that much abstraction and there is still lots of coding done, however, frameworks definitely can make the process of creating applications and software much more efficient.

Read – Reasons Why Laravel Is the Best PHP Framework in 2018

You see, a framework is essentially a reusable constant design that can be used to develop similar but not identical applications. So, while two different applications may use the same framework, the result is not always the same. The flexibility that some frameworks can offer is amazing as it allows for developers to create what they want more quickly without having their creativity limited. The way this works is that a framework identifies the bare bones foundation of the kind of software they are looking at. For example, every single game has characters; therefore, a game development framework will always address character creation. No matter what kind of game you are making, it is likely that you will need characters. So whether you are building a 3D game or a 2D game, that framework could be useful to you as a developer.

Do not reinvent the wheel

Basically, frameworks work as the foundation for a certain kind of application. It is then the developers’ duty to fill in the gaps and complete the software. So, the framework may say, “Hey, you need these things (characters, scenes, items, etc.) in your game.” And the developer responds by implementing those generic things into their application. The developer is responsible for actually detailing the specifics of each thing; however, the framework is responsible for ensuring that those things are in the software in the first place. In many ways, a framework can be compared to an Interface within Java. It is worth noting that the best way to learn frameworks as a developer is via projects and practice. For instance, DC Web Makers Company only offers project-based training where students learn concepts through real world projects.

Web developers nowadays heavily use the following JavaScript frameworks: Angular, Node.JS, React, Express.JS, jQuery Mobile, Ionic, and jQuery. For accomplishing one given task, two or more frameworks become interchangeable. For instance, to develop a mobile App that is downloadable in Google Play or Apple Store, a developer can use jQuery Mobile, React, or Ionic framework. One framework might be more efficient than another on certain projects, so it’s just a matter of developer’s experience. It is important to mention that before you use a JavaScript framework, you must have good understanding of JS programming language.

For Java developers, the developer can use Spring, Java Enterprise Edition, or Spark. For native App developers, Java Android is a well-established framework. It is important to mention that before you use a Java framework, you must have good understanding of Java programming language.

To put it simply, frameworks save a lot of time and tedious programming. Of course a game developer knows that they need characters and scenes, but what is the point of rewriting the same code over and over for each game they create. Rather, they can just create a framework and use it in every single game they make so that the basics are already laid out. Without frameworks, life as a software or web developer would be very tedious and more difficult. So, the next time you want to put your ideas to the test and actually create an application, look for any related frameworks that could help you on your journey.

There are lots of online resources for learning frameworks professionally. For instance, High School Technology Services offers variety of hands-on training from basic to advance courses related to popular frameworks such as Node.JS, Angular, and React for teenagers while Coding Bootcamps institute offers simiar courses for adults.