Weblizar Blog - Update yourself with all the latest tech news revolving around wordpress all at one place SQL Database: Reasons to Use & Mistakes to Avoid
Themes ($79) + Plugins ($59) = All Products Bundles ($99)
Grab it Now
HOT DEAL : 36+ WordPress Themes & Plugins Bundle with Lifetime Update & Uses Only $99 For more Detail to Click Here

SQL Database: Reasons to Use & Mistakes to Avoid 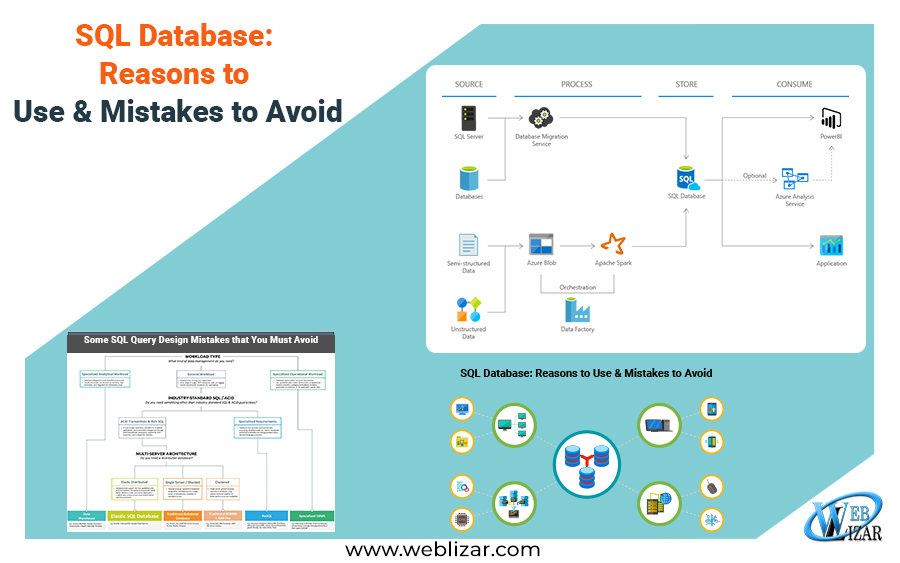 The Structured Query Language or the SQL could be defined as the domain-specific programming language that is utilized for managing the relational databases and would be performing diverse operations on the stored data contained in them. SQL would be utilized as the standard database language primarily by all the RDBMS such as Informix, Oracle, SQL Server, Postgres, MySQL, Sybase, and MS Access etc. SQL extensions and database engines are great at handling humungous amounts of data.

We understand that SQL is really great for tough data manipulation. However, SQL may not be that efficient for complicated business logic since it could be pretty difficult to understand. Business logic could be better performed when done in object-oriented languages for understanding easily.

SQL Is Supposed to Be a Standard

It is easy to locate people knowing SQL. It is quite easy and simple to connect smoothly with standard tools. You could have access to a plethora of resources for learning SQL.

In the case of SQL, we know that the query would be written precisely by specifying correctly the form containing results declaratively. It is the responsibility of the actual database software for understanding the most effective way of accessing data, operating on it, and turning it into results. Declarative queries would be insulating the query-author from the basic physical schema of your data.  If you compare this to non-declarative processing, we know that the applications seem to be very much fragile and could be tolerating modifications to the schema like added indexes or columns with absolutely no modifications made to the query.

“SQL does not scale” was cited as the chief reason why NoSQL gained traction. You would also hear quite often that for solving Internet-scale issues, you must necessarily abandon SQL. Currently, Google and Facebook have applauded their SQL systems publicly. Several NoSQL stores have actually incorporated SQL or even SQL-Type Query languages without hampering or compromising performance and progress.

While there is a host of SQL standards, open-source projects and vendors have practically extended SQL. VoltDB is known to support UPSERT functionality also, JSON extensions along with certain non-standard SQL requested by clients, all while performing all the typical SQL operations that developers are acquainted with.

Some SQL Query Design Mistakes that You Must Avoid

Today, SQL has become one of the best and most frequently and widely utilized database languages worldwide. In order to operate SQL Server databases smoothly, you must focus on query design.

Unfortunately, many people fail to give importance to the design process. As such, they commit simple mistakes that result in adverse consequences. One major blunder would be poorly or badly written queries which would not assure the super-fast user retrieval times. Your servers could be afflicted with major issues. In today’s digital era, you simply cannot afford to commit these sorts of mistakes. Here are some tips to handle such mistakes effectively.

Read – Why Websites are So Important for Customers in 2018

Not Reviewing Your Data Model

Your data model would be determining the way users actually access data. You must give a lot of thought to your specific model and keep reviewing your data model thoroughly right from the start. If you fail to do that you would be encountering several problems including dealing with complicated code and awkward queries and do not forget that both of these would be impacting your performance in a negative manner.

The simplest way of figuring out the queries required for accessing data is simply printing out the entire data model. You may alternatively, use an effective data model tool for doing the needful. A modeling tool or a printout would point out clearly the issues you could be encountering. You would be fully-equipped now for simplifying code, increasing coding time, boosting accuracy, and enhancing overall performance.

Not Taking Maximum Advantage of the Peer Review

Before the deployment of your entire query plans, it is necessary to let someone come and review it. There could be chances that you have missed something vital that is actually spotted by the others. Their reviews on your query performance and indexes would be assisting you in boosting your code.

Not Testing Your Queries

Developers do not like the idea of code testing. Initially, it was supposed to be quite rigorous. Moreover, the testing environment usually did not match the overall real production environment. But you simply cannot forget that testing is an integral part of coding. You must necessarily test your code meticulously and consider mimicking the ultimate production environment. Your queries could be performing well with just a few hundred or more records but definitely not against millions involved in the ultimate environment.

Failing to Assess Your Technique

You must consider the specific technique you would be using. The technique that caters best to your unique requirements. You may consider set-based logic but cursor logic could in many cases outperform the based logic. The critical thing is not to utilize a technique when there is a better alternative available.

Queries are known to effectively determine the performance and speed of any SQL database. So it is vital to focus on avoiding common mistakes like failing to even consider the precise technique you could use or not bothering to review your data model. You must not fail to utilize the old coding techniques, do not forget testing your queries, and do not make the mistake of not taking the fullest advantage of important peer review mechanisms.