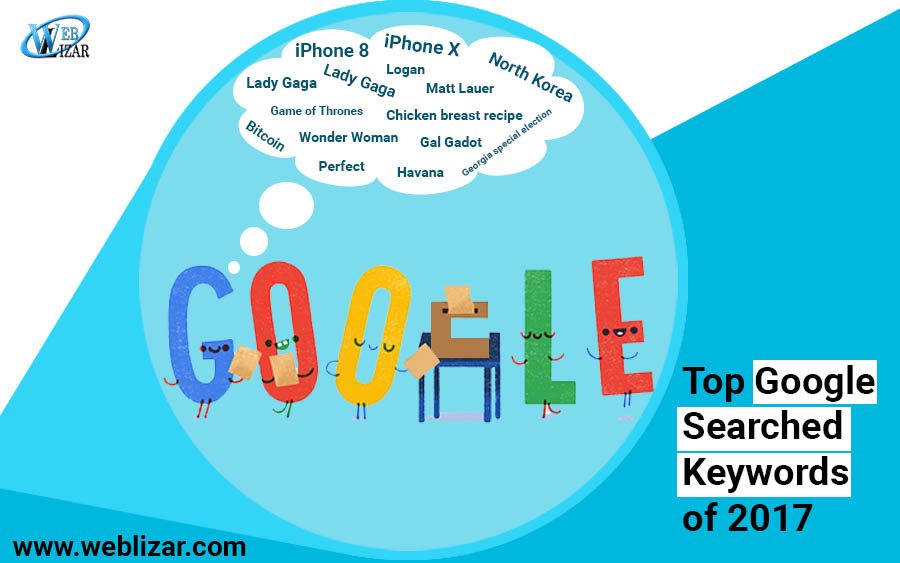 The most googled terms worldwide have been revealed by Google. Let’s learn about Top 10 global keywords searched on Google and why they became famous worldwide.

The Top Global Google Searches of 2017 are:

Hurricane Irma is on top of the list in most searched. Hurricane Irma was an extremely powerful and catastrophic Cape Verde-type hurricane, the strongest observed in the Atlantic since Wilma in 2005 in terms of maximum sustained winds.Irma is the third-costliest Atlantic hurricane. It Damaged $100 billion assets and many people lose their lives and houses.

The iPhone, not too surprisingly, ranked high — specifically the iPhone 8, which hit No. 2 on the global search list. It is the biggest sensation of the year. Apple iPhone 8 smartphone was launched in September 2017. The phone comes with a 4.70-inch touchscreen display with a resolution of 750 pixels by 1334 pixels at a PPI of 326 pixels per inch.

iPhone X, which ranked 3rd in most searched terms.

The iPhone X is intended to showcase what Apple thinks is technology of the future, specifically adopting OLED screen technology for the first time in iPhone history, as well as using a glass and stainless-steel form factor, offering wireless charging, and removing the home button in favor of introducing Face ID, a new authentication method using advanced technologies to scan the user’s face to unlock the device, as well as for the use of animated emojis called Animoji.

The new, nearly bezel-less form factor marks a significant change to the iPhone user interaction, involving swipe-based gestures to navigate around the operating system rather than the typical home button used in every previous iteration of the iPhone lineup.

At the time of its November 2017 launch, its price tag of US$999 also made it the most expensive iPhone ever, with even higher prices internationally due to additional local sales and import taxes.

Recommended Post: What Happens On Google In A Minute

Matt Lauer is on 4th place in most searched terms.

He is an American television journalist. He was a host of The Today Show from 1997 to 2017 and a contributor for Dateline NBC. He is fired last month by NBC News for “improper sexual behavior in the workplace.

She is fiancee to Prince Harry. Prince Harry announced their engagement a few weeks ago. She is an American actress and humanitarian campaigner. Markle was born and raised in Los Angeles, California. She graduated from Northwestern University with a degree in theater.

It is a Netflix hit series. It ranked number 6th in overall search.

13 Reasons Why is an American drama-mystery web television series based on the 2007 novel Thirteen Reasons Why by Jay Asher and adapted by Brian Yorkey for Netflix. The series revolves around a high school student, Clay Jensen, and his friend Hannah Baker, a girl who committed suicide after suffering a series of demoralizing circumstances brought on by select individuals at her school. A box of cassette tapes recorded by Hannah before her suicide details thirteen reasons why she ended her life.

Tom Petty is on position 7.

Tom Petty, who died in October, was an American singer-songwriter, multi-instrumentalist, record producer, and actor. Petty served as the lead singer of Tom Petty and the Heartbreakers. He was also a member and co-founder of the late 1980s supergroup the Traveling Wilburys, and his early band Mudcrutch.

Petty recorded a number of hit singles with the Heartbreakers and as a solo artist.

The “fidget spinner” made it to number 8 in most searched terms.

A fidget spinner is a toy that consists of a ball bearing in the center of a multi-lobed flat structure made from metal or plastic designed to spin along its axis with little effort. Fidget spinners became popular toys in April 2017.

Chester Charles Bennington was an American singer, songwriter, and actor. He was best known as the lead singer for the rock band Linkin Park, and also served as the frontman for Dead by Sunrise and Stone Temple Pilots.

India National Cricket Team is ranked 10 in the most searched term. Cricket is the national sport of England and is very popular among Indian subcontinent and some European countries.

Indian cricket team is ranked in the top spot among all three formats of the game. (T20, One Day’s and Test Matches)